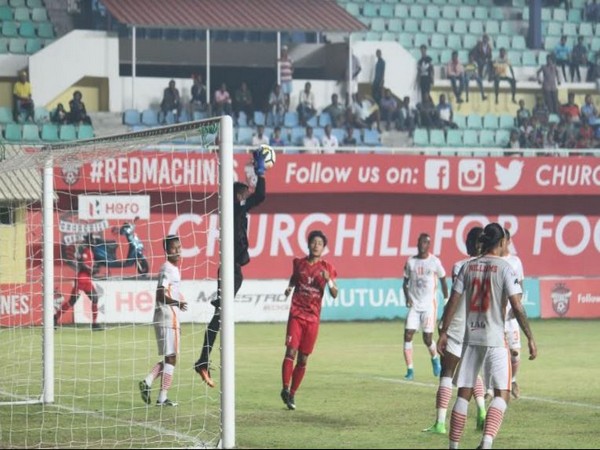 Neroca goalkeeper Bishorjit Singh’s performance helped the Manipuri side defeat Churchill Brothers 1-0 and halt their winning run in the I-League.

Churchill Brothers named an unchanged squad that had beaten Indian Arrows 2-0, while there were three changes for the visiting Neroca FC.

Pritam Singh drew a double save from Churchill custodian James Kithan in the 8th minute.

Neroca FC found a breakthrough when Churchill Brothers’ fullback Wayne Vaz brought down Subash Singh in the box as the forward was racing down the left and the referee awarded them a spot-kick in the 21st minute.

Felix Odili stepped up and steered the ball under the outstretched arms of Kithan as the visitors led 1-0 in the 22nd minute.

Churchill then made several attempts to bridge the gap and gain a lead.

Neroca goalkeeper Bishorjit made a save to deny a goal to PM Britto, who tried to curl a shot into the net from 12 yards out.

Meetei also tried a shot from distance that swerved away from goal. Then came a series of attempts from a corner when Osagie Monday, Ceesay and Eldor Hussein all tried to breach the Neroca backline which held on.

Koffi had a shot after chesting down a pass from the middle but Bishorjit dived in time to hold onto it. Bektur Talgat tried to fire at goal but that was saved again.

Until the final whistle, Neroca hanged on to their slender lead to walking away with all three points to close the gap with leaders Minerva Punjab FC.