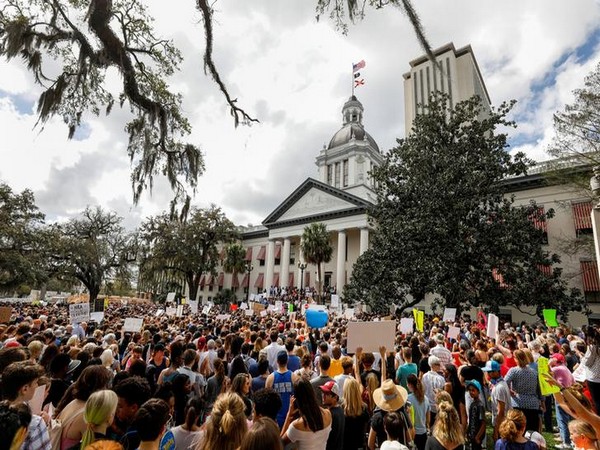 Hundreds of students descended on Union Station here on Wednesday and marched in protest against gun violence and demanded action on gun control, in the wake of the deadly mass shooting at a Florida high school last week.

A reporter from WAMU 88.5 FM captured the scene by video and posted the same on Twitter.

Scores of students from Florida’s Marjory Stoneman Douglas High School joined other students from other high schools on Wednesday as protests against ending of gun violence gained momentum across the US.

Students from California to Washington D.C., held walkouts in solidarity with the survivors from the Florida high school. The crowd marched at the state Capitol complex in Tallahassee, with banners and posters and chanting slogans such as “Never again!” and “Shame on you!”

Hashtags such as #NeverAgain and MarchForOurLives were trending on Twitter.

Scott Dworkin, co-founder of Democratic Coalition tweeted, “If we #BanAssaultWeapons that would be a good start in making sure we don’t see another mass shooting. #NeverAgain”

A student posted on Twitter, “My only wish is that the tragedies that leave us in terror and fear would stop. #NeverAgain”

“Today, it has been a week since #ParklandShooting. Parkland students are not going to let us forget it. In the past week, these high schoolers have given me so much hope. You all keep leading. I promise we will follow #MarchForOurLives,” wrote another student on Twitter.

Last week, nineteen-year-old shooter, Nikolas Cruz, went on a rampage at the Marjory Stoneman Douglas High School in Parkland, Florida and gunned down 17 students and injured 14 others. He allegedly used an AR-15 assault rifle that he had purchased legally.

Cruz was a former student and was expelled from the high school for disciplinary reasons. He has been charged with 17 counts of premeditated murder.

After the incident, many lawmakers, gun control advocates and student survivors of the Florida school shooting have urged the Trump administration to implement tougher gun measures.