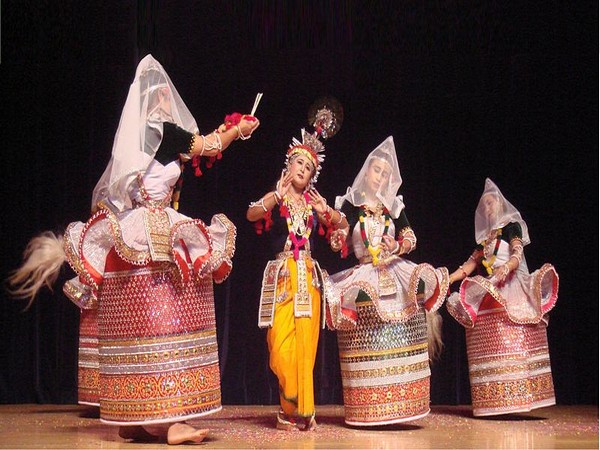 
Cutting across all religions, caste and creed a multi-cultural event was organized in Kwatha village of Manipur in order to celebrate the country’s diversity.
Ministry of Culture took an initiative to organise border area program at Kwatha village in Moreh aiming at uniting and promoting the rich cultural diversity of the country and to break the ice between mainland India and the northeast region.
Held under the aegis of North East Zone Cultural Centre (NEZCC) in collaboration with Village Authority and 12th Assam Rifles, Kwatha, the event brought to light various artists who showcased the arts reflecting culture and traditions of their origin states in the form of folk dance and music.
Traditional folk dance, tribal songs, tribal arts and crafts remained the major attraction of the program.
“We are implementing the border area program to reach out to the people who are living in the international border town and to bring artists from mainland India and from other parts of northeast to showcase the rich cultural diversity of India, and we have implemented this because there are programs which we use to implement only at some district headquarters or some cities. But now the government of India has instructed us that we reach out and interact with the people residing in the remotest of places from all over India,” said NEZCC Programme Officer, Oliver.
From ‘Garba’ folk dance of Gujarat to ‘Kalbeliya’ dance of Rajasthan, ‘Bihu’ dance of Assam and various tribal songs and dance stole the show as young artists clad in their colourful traditional clothes and immaculate accessories mesmerized the crowd by their performances.
It was a delightful experience for the villagers of the Kwatha village as they could witness the vibrant extravaganza of various cultures getting united with the spirit of oneness and brotherhood.
“We are delighted to be here and we are frequently visiting the hilly areas to perform. People are getting united here and the experience is really good for my entire group,” said artist from Assam, Anupama das.
The event provided an opportunity to the people from the remotest corner of the northeast region to interact with the people from several other states and exchange their ideas and explore more about each other’s culture.
More than 150 local artists from states like Kerala, Haryana, Gujarat, northeast states of Assam, Manipur etc participated in the program.
“To keep up the culture and tradition of Gujarat, I am here to showcase to the world, the rich cultural diversity of Gujarat. I came to Moreh all the way from Gujarat. People are amazing here and the atmosphere is also soothing. We love each other. I am thankful to NEZCC for inviting us to participate here,” said an Artist from Ahmedabad, Daksha Mahinder Dakshi.
Keeping up the tradition of Manipur, a group of young Manipuri women donned in their traditional outfits called ‘Phanek’ grooved to drum beats followed by a live ritualistic song sung by a group of middle aged Manipuri women.
Organizing such event helps in strengthening national integration thereby bringing people closer cutting across all religious lines irrespective of caste and creed. At the same time it paves a path for all to explore and exchange ideas on varied cultures and traditions.
It is worth mentioning that Border area programmes are often being organized to create awareness about the rich cultural mosaic of the country and instill a sense of brotherhood amongst all.