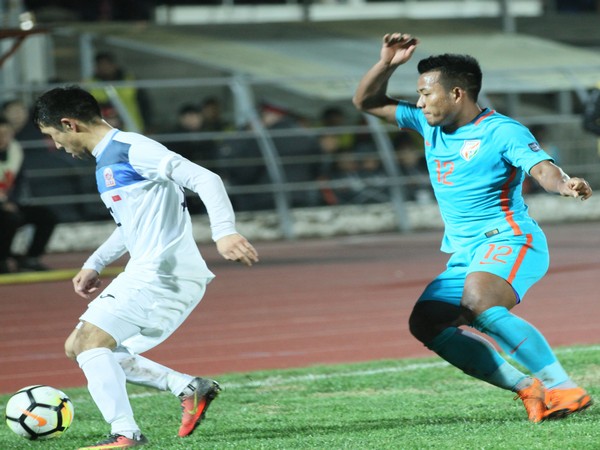 A late header from Jeje Lalpekhlua could not prevent the Indian football team’s 12-match unbeaten streak from coming to an end as the side went down 1-2 to Kyrgyz Republic in their last Group A match of the AFC Asian Cup Qualifiers here at the Dolon Omurzakov Stadium last evening.

The last time the two teams met, India rode on a sublime Sunil Chhetri strike to win by a solitary goal.

The hosts had the perfect start to the match as they surged ahead in the second minute itself, off their first attack down the right when Zemlianukhin Anton dug it into the top corner of the net.

The second goal came in the 73rd minute – the tireless and talented Murzalev Mirlan managing to swerve it beyond Indian captain Gurpreet Singh Sandhu’s reach, who otherwise had a notable outing under the bar pulling off a couple of blinders.

In the first half, the hosts looked the better side trying to gain momentum with their deft passing. The Indians did press hard but Kyrgyz appeared more composed on the ball.

However, India did find the back of the net twice – in the 18th minute and then in the 30th minute, but on both occasions Balwant Singh was ruled off-side.

In the 18th minute, Rowllin Borges’ free-kick from outside the box beat all, rattled the crosspiece and fell for Balwant who put it in but the flag was up much prior.

In the 30th minute, Balwant sneaked it and did put it past rival Goalkeeper Matiash Pavel but was ruled off-side as the home side held on to their one-nil lead till the interval.

Changing over, Jerry Lalrinzuala replaced Narayan Das and was involved in India’s first shot on target in the half. Willing to overlap, he cut in and laid it for Borges but his powerful right-footer was punched away by Pavel. Udanta lurking around did pounce on the rebound but wasn’t able to be incisive.

Off the counter, an acrobatic Gurpreet came off with the save of the match palming off from close.

Gurpreet made his presence felt in the 67th minute when he stood in between from a hand-shaking distance to deny Kyrgyz their second goal much to the frustration of a packed crowd.

But the crowd were not to be denied for long – Murzaev making it 2-0 in the 73rd.

Anirudh Thapa replaced Borges in the 82nd minute and seemed to have an impact on the proceedings. His fresh legs helped him evade the opponents and his desire to play it in the gaps stretched the rival defence.

It was off one such movement that Jeje headed in Narzary’s cross. But it came a bit too late.