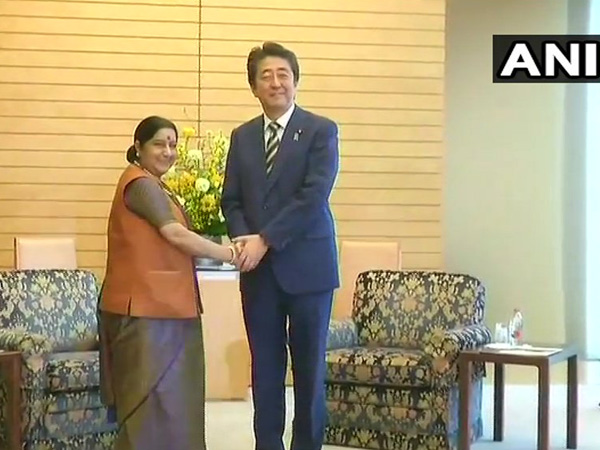 During the meeting, the two leaders discussed ways to further enhance the bilateral ties between India and Japan. Swaraj also conveyed the greetings of Prime Minister Narendra Modi to Prime Minister Abe.

On the other hand, the Japanese Prime Minister added that the traditional friendship between the two countries was characterised by heart-to-heart bonds and blessed with a huge potential for growth.

The Ministry of External Affairs (MEA) spokesperson Raveesh Kumar captured the moments of the meeting on Twitter.

The EAM also on Thursday held a bilateral meeting with Kono for discussing ways to strengthen bilateral ties between the two countries.

While addressing a gathering of Indian diaspora at the Vivekanand Cultural Centre in Tokyo yesterday, Swaraj lauded the contribution of the diaspora for strengthening the bond with Japan and creating a positive image about India in Japan.

The EAM reached Tokyo on Wednesday, on a three-day visit to attend the ninth India-Japan Strategic Dialogue with Kono.

Students in TN and Puducherry protest against CAA