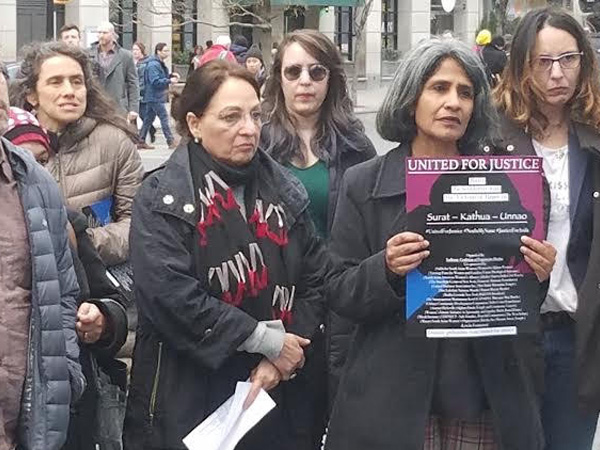 A New York City-based Hindu organization marched to the Union Square, here, to demand justice for the recent rape victims of Kathua, Unnao, and Surat.

‘The United for Justice rally’ on Monday was attended by the members of ‘Sadhana’.

Criticizing the ruling government in India for its delayed action, the organisation accused it of supporting the rapists.

Addressing the crowd at the Union Square, Co-founder of Sadhana organisation, Suneetha Vishwanath, said, “Some actions are so wild that it becomes necessary for people to come out and condemn them. These rapes in Kathua, Unnao, Surat and any other part of the world is nothing short of evil.”

The members demanded justice for the 8-year-old, who was allegedly abducted, drugged, raped, tortured and killed in Jammu and Kashmir’s Kathua district.

They also urged the government to take action against the rape victim in Unnao, who lost her father in her battle to get justice, and the gang rape and probe the alleged murder of an eight-year-old in Surat.

Prof. Zafar Iqbal Stabbed in Bangladesh, is now ‘out of Danger’