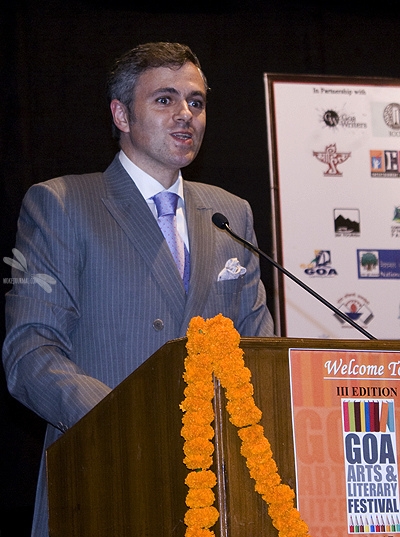 Former Jammu and Kashmir Chief Minister, Omar Abdulla was shamed by Kashmiri Americans inÂ University of California, Berkeley (UC Berkeley), United States (US) on Thursday, April 19, 2018. A protester called him a war criminal and said that they would take him to International Criminal Court for War Crimes.

Omar Abdulla was in US to speak about Kashmir, and his vision for the path forward. However, his speech was interrupted by protesters who questioned him about sanctioning violence against Kashmiris. Earlier on Wednesday, an online campaign was launched against UC Berkeley for having invited Abdulla to speak there. The signatories of the petition asking to stop Abdulla from speaking said ‘Berkeley is wilfully providing a platform to Mr Omar Abdullah and allowing him to masquerade as the representative of the people of the occupied Kashmir, which he is clearly not.’ The signatories included academics, journalists and research scholars and was circulated online.

A large group of Kashmiris consider Abdulla as a CM who acted as an Indian agent during his tenure. He is considered to have sanctioned brutal violence against Kashmiris and military occupation of the place by the Indian state. Kashmir, a perennial conflict zone of India has seen many uprisals that were all suppressed by the police and Indian military. The petitioners said that the 2010 civilian uprising against the India state was repressed by Abdulla and his forces, resulting in the death of over 100 boys, arrest and torture of thousands of youth and sexual abuse of minors.

According to the petition, it was Abdulla who introduced pellet-shotguns in Kashmir. These guns continue to turn Kashmiris blind even today. ‘It was his regime that gave a clean chit to the culprits responsible for the 2009 rape and murder of 17-year-old Asiya and 22-year-old Neelofar. It was his regime which gave monetary rewards to police and paramilitary who brutally quelled the 2010 protests,’ the petition said.

Even as Abdulla was seen questioning current CM Mehbooba Mufti’s government on the manner in which it was handling the case of rape and murder of an eight year old Bakerwal Muslim girl, Asifa in Jammu, he faced heavy criticism from the protesters for covering up the rapes of two Kashmiri Muslims, 17-year-old Asiya and 22-year-old Neelofar that was allegedly perpetrated by the Indian military.

Abdulla had to leave the venue midway due to the protest.

How Do You Sleep At Night, Omar Abdulla?