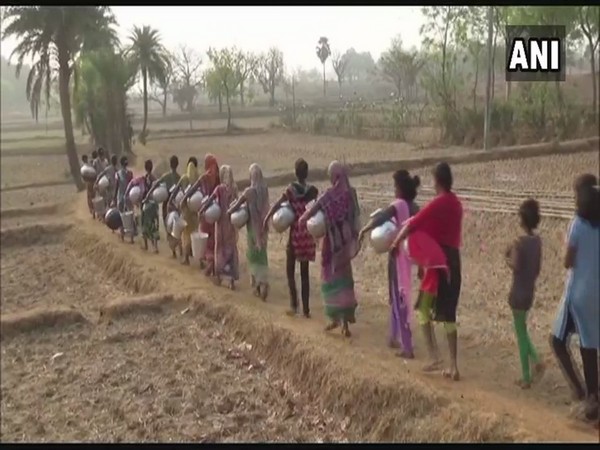 
As the intense heat condition prevails across Odisha, rural areas in the state are facing an impending water crisis.
The women of Mayurbhanj district are forced to travel to far off places to fetch buckets of water from other areas for drinking purposes.
Locals told media that the area has been reeling under acute drinking water crisis for the last few days. While the wells in the localities have gone dry, the stand posts do not yield water.
The water supply by the state’s Public Health Engineering Department (PHED) is also highly erratic. The residents of the district have lodged complaints with the PHED office to improve the situation, but all in vain.
Frustrated with the ongoing crisis, residents of Mayurbhanj district have detained junior engineers and supervisors of the PHED several times but to no avail.
A PHED Executive Engineer (Mayurbhanj) admitted that there was a water crisis in the district.
Explaining the problem, the engineer said, “The water supply was disrupted as old pipes are getting replaced. Besides, some technical issues which we are trying to resolve as soon as possible. The department has been supplying water to the areas through tankers. We have decided to install water tanks, and dig borewells. As there is no alternative source to supply drinking water immediately, we have been dispatching water tankers as soon as we received complaints.”
Debashish Marandi, an official of tribal development commission, told media, “The water level is going down. Temperatures have hit 41 degrees Celsius in Mayurbhanj. Every step has been taken by the Chief Minister (Naveen Patnaik) to ensure that all of them get access to clean and safe water.”