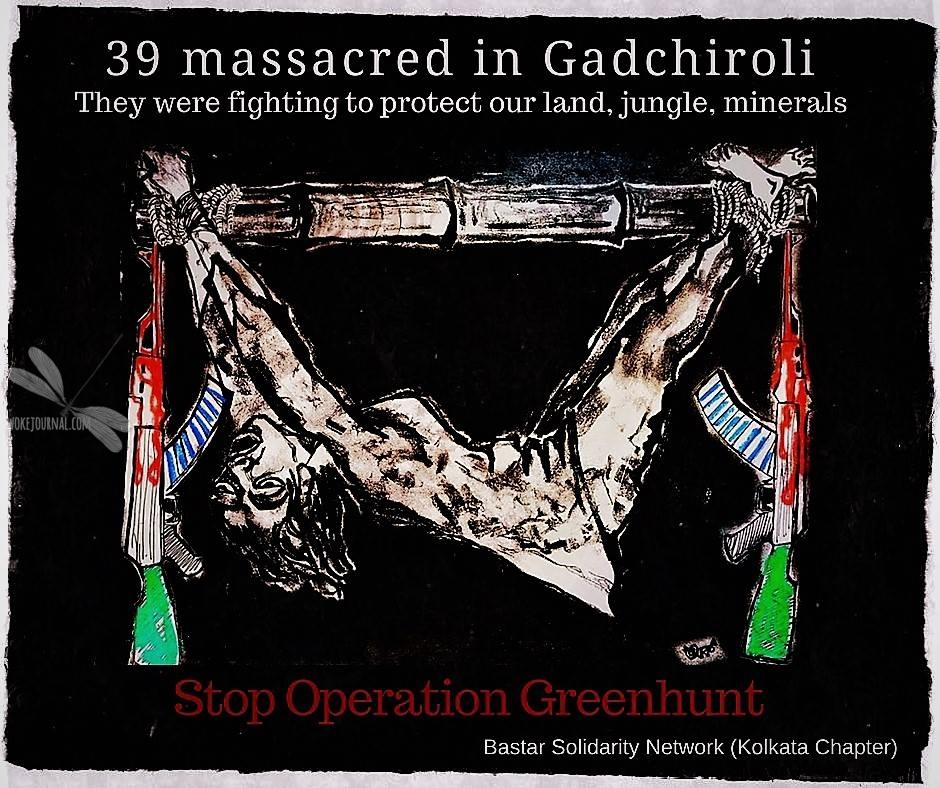 At least 39 Maoists were killed in Gadchiroli, Maharashtra, India in what the security forces called ‘encounters’ in the past week. The state and media celebrated the ‘achievement’ and described it as the most successful operation in helping kill Maoism so far. The number in news that started with the announcement of murder of 16 Maoists has now reached 39. Meanwhile, the special forces held a celebratory dance party for their own success in having killed more than 39 people.

On April 23, 2018, news broke that Gadchiroli police had killed 16 Maoists in an encounter. It was said that these were important members of the Communist Party of India (Maoist). The number of bodies found kept increasing while the reports of the police’s success were published.

More than 15 bodies had to be fished out from Indravati River near Kasnasur. They were bloated and had started to decompose. Some body parts were discovered which were possibly the leftovers from the crocodiles and other creatures that ate the bodies.

The state’s aim of wiping out Communist Party of India (Maoist) has been in place since 2009 when a widespread campaign was launched with this goal. The Commando Battalion for Resolute Action (CoBRA) was to take the lead in the operations against Maoist insurgents. CoBRA has, over the years started functioning as a force that terrorises people, especially minorities, in the interest of the state.

However, the Maoist movement is considered to be a wider network of people and not solely belonging to a party. The ideology of justice for tribal and backward communities of India has been a constant goal in this armed struggle which is now called Left Wing Extremism (LWE) by the state.

Among ideological differences and numerous splits within the already hunted down community of Maoists, the history of the movement is always traced back to Naxalbari in West Bengal (from where the term Naxalites originated) which saw an armed peasant uprising in 1967.

The ruling right wing Hindu nationalist party Bharatiya Janata Party (BJP) has been in the forefront of encouraging Maoist killings. India’s aggressive policy towards curbing Maoism has been a pretext for army, police and others to conquer new heights in their careers and for monetory perks. BJP fuels this drive with the special packages and benefits and rewards for officers who carry out these state funded operations.

In the Gadchiroli killings, the police maintained that they acted upon a ‘tip’ that they received regarding the location of the Maoists. They said that shooting had to be initiated by the police because the Maoists opened indiscriminate fire on them. But after the news broke, multiple narratives have emerged from the villagers who were present around the areas while the shootings happened that say that this was not true. Also the police had no explanation for how it was possible that Maoists opened fire on them and yet 39 of the Maoists were killed while the other side suffered no casualties.

In the police firings that were done on people near Kasansur village in Tadgaon Police station area of Gadchiroli, it is said that the activists were attending a wedding. 31 of them were killed while they were having breakfast. The second killing area was Nainer forest near Rajaram Khandla in Aheri taluka. There, according to a Times of India report, the local tribals said that there weren’t those many gun shots as the police claimed.

The absolute investment of the Indian state in this matter could be a reason why most media are silent on the incident and are even celebrating it. A video released by news agency ANI showed the police and the army celebrating their ‘victory’ by dancing to popular film songs.

Bastar Solidarity Network (Kolkata Chapter) has condemned the mass killing in Gadchiroli. They have demanded a judicial probe into the incident.Â  Apart from this, on May Day, (May 1, 2018) a protest has been planned at Indian Embassies around the world by the Welsh Socialist Republican Congress.