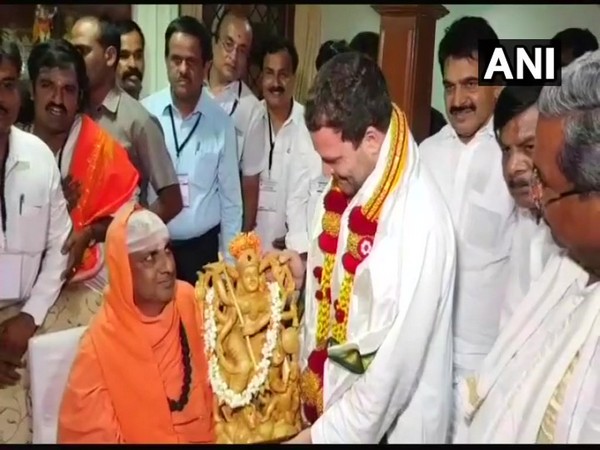 Situated at the foot of the famous Chamundi Hill, the Congress scion met and sought the blessings of the main pontiff, Jagadguru Sri Shivarathri Deshikendra Mahaswamiji.

In the previous leg of campaigning in March, Rahul was slated to visit the mutt, but could not do so, after which he was reportedly heavily criticised.

Amid extensive political campaigning by the two frontrunners, Congress and the Bharatiya Janata Party (BJP) to establish their reign in the southern state, the Lingayat community has been a key focus of the two contenders, with extensive efforts being made to appeal to the Lingayat-Veerashaiva faith.

In March, Karnataka Chief Minister Siddaramaiah had declared minority status to the Lingayat community. Soon after the community gained prominence in the political sphere, leaders of a number of parties began appealing to the community to garner votes in their respective favour.

BJP President Amit Shah began his two-day tour of the Mysuru-Mandya-Chamarajanagar-Ramanagar belt in March by visiting the Suttur Mutt to seek blessings of the pontiff.

Earlier this month, the Congress and BJP Chiefs also called on the 111-year-old seer of the Lingayat-Siddaganga Mutt, Shivakumara Swami, who is considered to be one of the most esteemed living religious and social practitioners of the Lingayat-Veerashaiva faith.

On a related note, Karnataka will go to polls on May 12 to elect representatives to the 225-member state assembly.

The results will be out on May 15.

Man Dies After Falling Into Open Drain in Mumbai