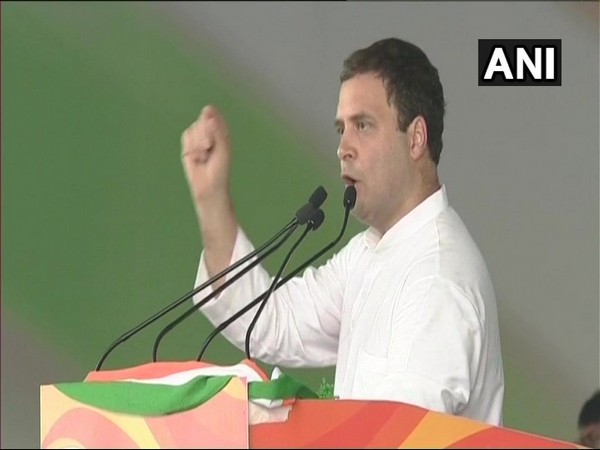 
Congress President Rahul Gandhi on Sunday questioned Prime Minister Narendra Modi’s silence over various issues including Justice BH Loya death case.
Addressing a ‘Jan Aakrosh Rally’ at Ramleela Maidan in Delhi, Gandhi said, “For the first time in 70 years, four Supreme Court judges came in front of the people and asked for justice. Modiji was silent. People in the Supreme Court took the name of Justice Loya and said that the court was under pressure.”
Further, Gandhi raised concerns about corruption ahead of the Karnataka assembly elections.
“Bharatiya Janata Party’s chief ministerial candidate in Karnataka has gone to jail. And on the other hand, Narendra Modiji keeps saying that he is fighting against corruption. Piyush Goyal could not declare his own company. For the first time, the power minister sold his company to another power company. Nirav Modi took your money and ran away. This government put you in lines just so you could access your own money, all in the name of black money,” he said.
Describing the party workers as “sher ka bachha” (lion cubs), the Gandhi scion showed confidence in winning the 2019 general elections.
“Every Congress worker is a lion’s cub. We will win in 2019. Go to Assam and Punjab and ask how many Congress workers have given their lives for the country. The Congress workers have given their lives for the truth. We will show them in 2019. Narendra Modi is worried now. He is hiding behind power,” he said.
Reacting to Prime Minister Modi’s recent informal visit to China, Gandhi said, “In Doka La, China is making helipads. And the Indian Prime Minister is having discussions in China without any agenda. What kind of a prime minister is this? This is why the people of India are angry with the government today.”
He said, “The Chinese are aggressively pursuing militarisation in Doklam. Despite this, all that PM Modi does is hold a “no-agenda” meeting with the Chinese President.”
Gandhi further spoke about senior party leader Salman Khurshid, who had recently said that there were Muslims’ blood stains on hands of the Congress party.
He said, “In our party, we welcome different opinions. A few days back, Salman Khurshid expressed a different opinion. I want to say: I will be the first one to protect Salman Khurshid. But when we are fighting RSS, we have to be united.”
“However, in Prime Minister Modi’s party, there is only one viewpoint that is allowed: that of Narendra Modi and Amit Shah. This is the difference between them and us,” the Congress President said.
“I respect differences of opinion and will protect any dissenters. However, the BJP neither appreciates different opinions nor does it respect its own elders,” he said.
Taking a jibe at Prime Minister Modi’s seaplane ride during the Gujarat Assembly elections this year, the Congress President said, “You stood up to this government in Gujarat. The press was saying that Congress could not get more than 50 seats in Gujarat. All Congress workers stood up in Gujarat and Narendra Modi had to run away in a seaplane. Now, you should see what we do in Karnataka.”
Gandhi also hit out at the Prime Minister Modi-led government over Jammu and Kashmir’s Kathua and Uttar Pradesh’s Unnao rape cases and said, “For the first time and Indian PM has been asked to protect woman of the country on foreign soil. People have urged Modi Ji to safeguard women in India.”
Launching a scathing attack on the Rashtriya Swayamsewak Sangh, Gandhi said the RSS people are being posted in all institutions in India. In 2014, the BJP and RSS machine did nothing but spread lies. BJP and RSS people try to spread hatred wherever they go. But this country is a place of love and peace.”
The rally comes ahead of the Karnataka Assembly elections, which will take place on May 12.
Former Congress president Sonia Gandhi, incumbent party President Rahul Gandhi, prominent leaders like Ghulam Nabi Azad and others were also present at the rally.