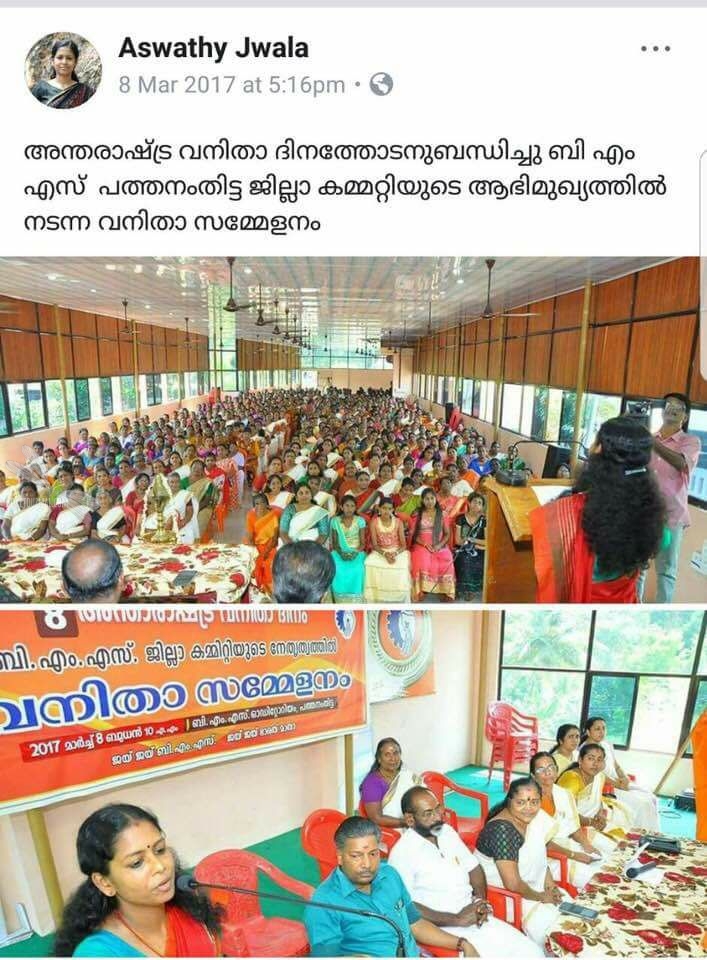 After she held a press conference accusing the Kerala Government of attacking her and charging a false case against her, new details have emerged about Aswathy Jwala that reveal her links to right wing Hindu outfits.

The case of Liga Skromane, the Latvian woman from Ireland who went missing and was later found murdered in Kerala capital Thiruvananthapuram, took a new turn when the police charged a case against Aswathy Jwala, a Malayali woman from a Non-Governmental Organization (NGO) called Jwala who was helping Ligaâ€™s sister Ilze, in the search for Liga. Aswathy had stated in a press conference that Kerala Chief Minister (CM) Pinarayi Vijayan had refused to meet Ilze, Liga’s sister and that the police did not help in the investigation or search and instead harassed the complainants.

This had caused Communist Party of India (Marxist) (CPI(M)) supporters and leaders to criticise Aswathy. Several allegations were made against her and the Non Governmental Organization (NGO) called Jwala that she runs. She was also accused of taking money from Liga’s sister Ilze for having helped her and Liga’s husband look for her. However, Ilze and Aswathy held yet another press conference to say that the case was false. Ilze herself had said that Aswathy had not taken any money from them.

It is after these events that Aswathy’s connection to right wing Hindu groups was brought out in social media. Pictures of her attending programmes conducted by Hindu groups were cited. BJP also held a march in support of her. A group called Hindu Helpline expressed solidarity with Aswathy and visited her, a social media post by one Mr. Patheesh Viswanath of the Hindu Helpline said. It also said that they were challenging Pinarayi Vijayan’s police force to try and take any action against Jwala. Aswathy has also been spotted as attending Rashrtiya Swayamsevak Sangh’s (RSS’s) labour party, Bharatiya Mazdoor Sangh’s programmes.

Aswathy’s right wing connection becomes contextual when seen in the light of the developments in the Liga murder case. It has been reported that Liga’s Yoga instructor and travel guide could be involved in the crime. He is among the four arrested by the police in relation to the case. The arrested people have given multiple narratives to the police regarding Liga’s murder. While one said that she was murdered after she resisted their attempt to rape her, another has confessed that they wanted money from her.

Liga Skromane was in Kerala to take Ayurvedic treatment for her depression.

16 Babies die at State-run Sishu Gruh in a Month