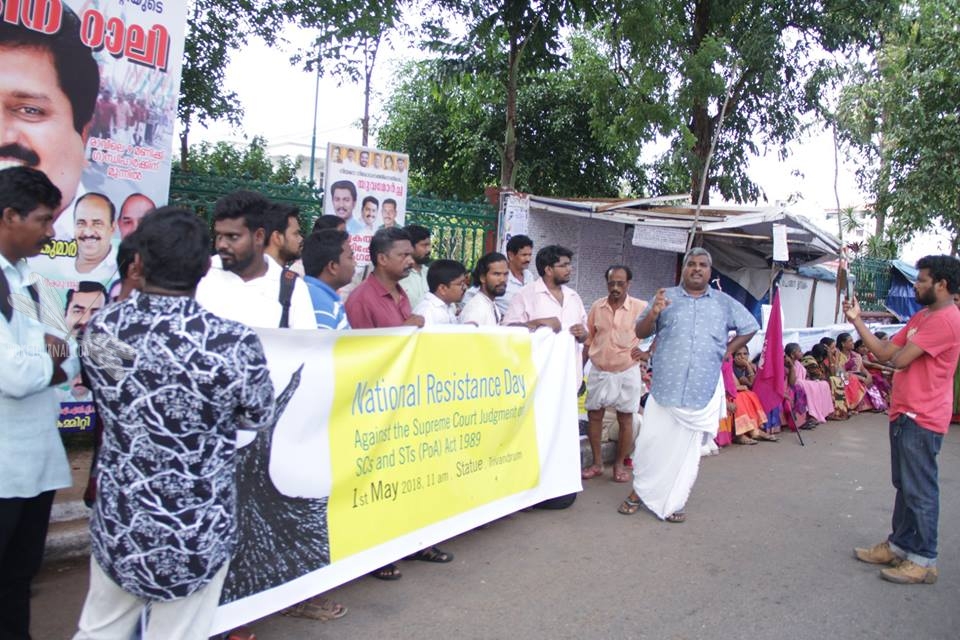 A National Coalition for strengthening the Scheduled Castes and Scheduled Tribes (Prevention of Atrocities) (PoA) Act and its implementation, which is an umbrella platform of around 500 Dalit and tribal organisations across India, observed National Resistance Day on May 1. The coalition is also in touch with SC and ST associations in various government departments and organisations like the banking sector, insurance sector and Indian Railways.

â€œIn India class, caste and gender are closely interlinked. They cannot be separated from each other. Hence the coming together of what is seen as ‘Left’ along with Dalits and Adivasis should not come as a surprise,â€ said VA Ramesh Nathan, national convener for the coalition.

Nathan anticipated day-long peaceful demonstrations in all district headquarters and state Capitals as well as in New Delhi against the Supreme Court’s decision to dilute the SC/ST Act.

â€œWe have chosen this day, as this day is being celebrated globally for the realisation of the rights of the working class. In India most of the working class belong to Scheduled Castes and Scheduled Tribes community. We still need to go a long way for the protection and promotion of the human rights of Dalit, Adivasis, women and children, who have been facing multiple forms of caste-based discrimination and violence. The Resistance Day is to be observed for strengthening the SC/ST Prevention of Atrocities Act and its implementation,â€ he said.

Organisations protested against the Supreme Courtâ€™s order on the Scheduled Castes and Scheduled Tribes (Prevention of Atrocities) Act. Last month on March 20, in a move that faced widespread criticism and sparked off protests in the country, the Supreme Court had diluted the provisions of SC/ST Act giving protection to perpetrators.

1 â€“Â Government of India should ensure that either through Judicial or Parliamentary recourse the status quo of the SCs and STs (PoA) Act 1989 is restored to its original position as was before 20.03.2018 judgment.

2 â€“Â The SCs and STs (PoA) Act 1989 and the POA Amendment Act 2015 shall be included in the Ninth Schedule so that it may get some protection in the matter of judicial review.

3 â€“Â Release of all the Dalit and Human Rights Defenders, activists, leaders, community members and employees arrested on 2nd April, during the â€œBharat Bandhâ€. Immediate action should be taken against the people who were indulged in firing against the community.

4 â€“Â Robustly, enforce and implement the amended SCs and STs (PoA) Act 1989 and Rules 1995 and in specific the rights of victims and witnesses as enshrined in the amended Act.

5 â€“Â Establish mandatory exclusive special courts as per the Section 14 of the SCs and STs (PoA) Act 1989 in each district. These courts shall not take cases of any other legislation.

6 â€“Â Take immediate measures to appoint Public Prosecutors of victimâ€™s choice as per Rule 4 (5) of the SCs and STs (PoA) Rules 1995 for speedy trial of the cases.

7 â€“Â Conduct an open and transparent investigation under Scheduled Castes and the Scheduled Tribes (Prevention of Atrocities) Amendment Act, 2015 and prosecute those Government and police officials under section 4 of the Act who are found to be aided and abetted criminals or found to have negligent in their responsibilities in implementing the provisions of the Act/plan and schemes.

8 â€“Â Immediate notification or G.O to be issued to all the state governments to frame contingency plan in line with contingency plan framed by the Government of Tamil Nadu and simultaneous framing of guidelines and schemes under the plan if any for the purposes of rehabilitation, employment, pension, strengthening socio-economic conditions of the victims. Unless this is done the plan would be merely a piece paper.

9 â€“Â National Human Rights Commissions, Scheduled Castes and Scheduled Tribe Commissions shall conduct open hearing all over the country on cases of atrocities and on the implementation of SCs and STs (PoA) Act. The Commissions shall ask for the annual reports from the states and present the same before the Parliament.

11 â€“Â Ensure that the underdeveloped Dalit and Adivasi habitats, habitats prone to atrocities, and habitats which are arsoned or damaged are provided with land, adequate housing, clean water and sanitation facilities and infrastructure facilities from SCP/TSP from the provisions of Contingency Plan.

12 â€“Â Ensure externment of the persons likely to commit offence under the Act in any area included in â€˜Scheduled Areasâ€™ or â€˜Tribal areasâ€™ as referred to in Article 244 of the Constitution.

Ajay kumar, activist and director of RIGHTS, a human rights NGO said that there was aÂ high level of cooperation from people and organisations for the demonstration.Â The National Resistance Day is the continuation of Bharat Bandh that was held on April 2 and the Kerala Dalit bandh on April 9.

Dalits and Adivasis are expressing their anger and discontent not just over the dilution of PoA but to the entire caste biased judicial system. In the thirty years from 1989 when the act was implemented, the conviction rates for the Act has been extremely poor.

National Resistance Day in Thiruvananthapuaram was inaugurated by Murali Thonnakkal. He stressed that of more than 80 per cent of cases registered according to PoA act did not result in conviction of accused. The bureaucracy, especially the police, never try to help the Dalits who complain and render the act weak. This being the reality, we should protest to save our constitutional rights and protect PoA act, he said.

Pratheesh, a student from Nagarkovil saidÂ that the entire state mechanism psychologically damages Dalit bahujan people and it is the PoA act which protects dalits from upper caste people.

Madhusoodhanan Naga, a research scholar in CSDS said that Bharatiya Janata Party (BJP) government which is working towards the building of a Hindu rashtra was being supported by the Supreme Court Verdict.Â government is working for the upper castes and it makes them happy, he said.