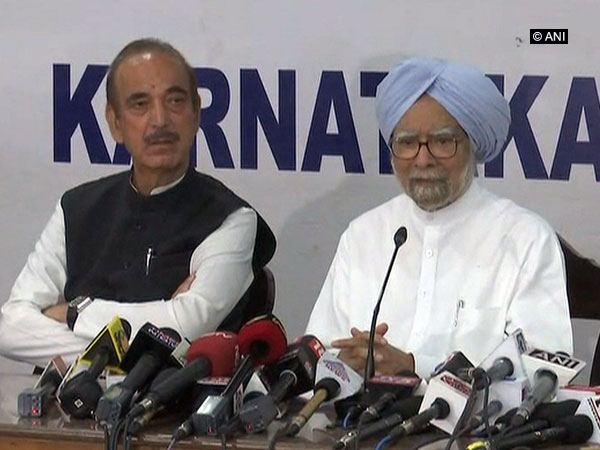 Former Prime Minister Manmohan Singh on Monday castigated his successor Narendra Modi and accused him of using language unbecoming of a prime minister and attempting to polarise poll-bound Karnataka.

“It is shocking that a Prime Minister stoops so low and uses such language and phraseology which is unbecoming of a Prime Minister, particularly when he is in a state where elections are taking place. No prime minister has used election time to say things in a manner that Modi ji has been trying. I sincerely hope he will now learn a lesson and not seek to polarise the society,” Singh said at a press conference here.

The senior Congress leader also raked up the multi-crore loan default scam that involved celebrity jeweller Nirav Modi and held the Centre responsible for turning a blind eye to it.

“As far as Nirav Modi is concerned, it was obvious that in 2015-16, that something is going around with the affairs of (Nirav) Modi and yet the Modi government didn’t do anything. If blame has to be cast, it has to be on the government mandate,” he said.

Singh said that the Prime Minister was in the company of the accused businessman at the World Economic Forum (WEF) organised in Davos, in January, the same time when the scam-hit Punjab National Bank (PNB) detected the scam.

He added, “Only a few days later he ran away from the country. That itself is the reflection of the sad state of affairs in this wonderland of Modi government.”

The scam was started in 2011 and was detected in the third week of January.

However, Nirav Modi managed to flee the country before the PNB officials filed a complaint with the CBI on January 31.

“Prime Minister Modi hasn’t held a single press conference in the last four years. That itself is a reflection of the state of affairs,” the former prime minister remarked.

With the assembly elections inching nearer, Karnataka has turned into a battlefield with both BJP and Congress indulging in aggressive campaigns.

Karnataka will go to polls on May 12 to elect representatives to the 224-seat assembly. The results will be declared on May 15.