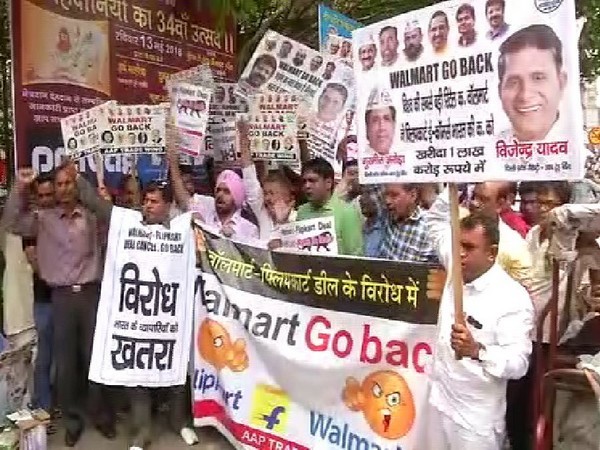 Following the acquisition deal between American retail giant, Walmart, and Indian e-commerce major, Flipkart, a protest was staged by a group of individuals opposing the same.

The protestors, comprising members of the Aam Aadmi Party’s (AAP) trade wing, among others, claimed that if approved, the entry of Walmart in India would disrupt the lives of local traders.

“We oppose the entry of Walmart in India, as it will disrupt local industries. We want the Centre to take substantial steps to protect them, and also frame a central e-commerce policy. Wherever Walmart has established itself, it has destroyed that region’s local produce. Hence, we are protesting the deal, as we do not want small-scale traders to go out of business,” a protestor told media.

On Wednesday, Walmart announced that it would acquire 77 percent stake in the Indian e-commerce major against an initial payment of USD 16 billion (over 1 lakh crore).

Soon after, a protest was staged by the Swadeshi Jagaran Manch, the economic wing of the Rashtriya Swayamsevak Sangh (RSS) against the acquisition deal.

Furthermore, the Polit Bureau of the Communist Party of India (Marxist) or CPI (M) issued a statement opposing the deal, claiming that the deal would have a detrimental impact on the small and medium enterprise sector (SME) in India.

“The Polit Bureau of the CPI (M) strongly condemns the sanction provided by the Modi government to allow such an acquisition to take place which is against the interests of our country and its people. The PB demands that this should not be allowed,” the party statement read.