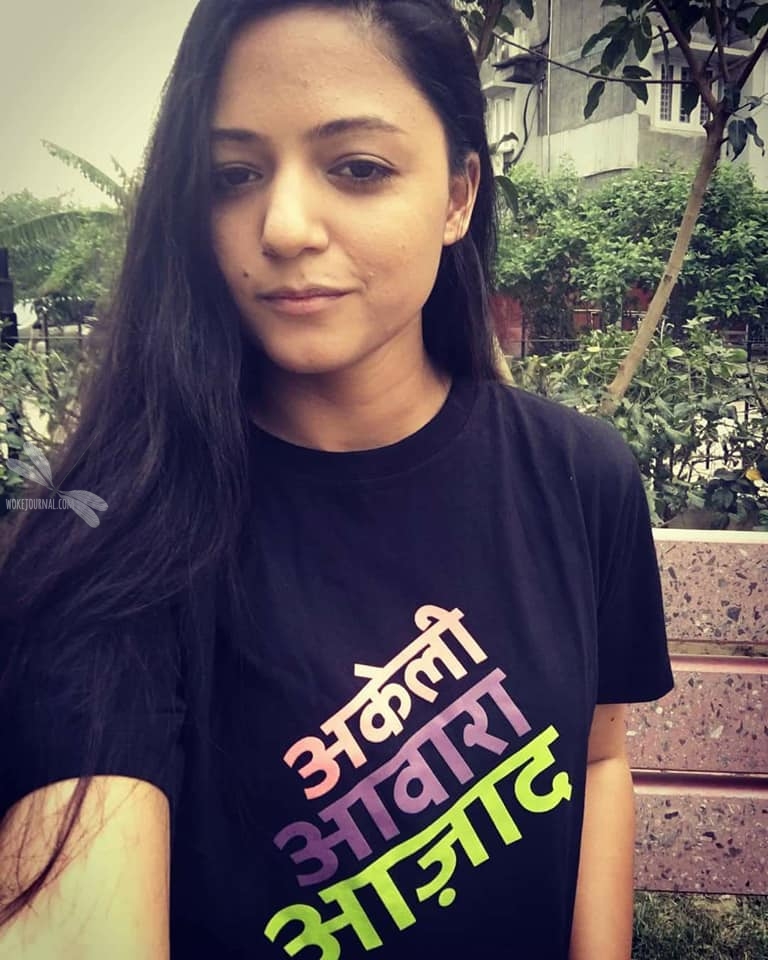 Hindu Fundamentalists continue to target former Jawaharlal Nehru University (JNU) Students’ Union Vice-President and activist Shehla Rashid. Shehla, who has been a vocal critic of the ruling Hindu fundamentalist party BJP, has, in the past been attacked through fake news, pictures and rape threats.

Now, a photograph of herself that Shehla had posted on social media on May 12, 2018, has been edited to include right-wing propaganda and is being circulated. Shehla’s T-shirt that originally read ‘Akeli,’ (alone) ‘Aawara,’ (wayward) ‘Aazaad‘ (free) reads ‘Mandir Wahi Banega,’ (The Temple will be Built Right There) ‘Vote for BJP‘ along with the picture of the party symbol – a saffron lotus.

One of the versions has the picture of a saffron India map with a Hindu goddess carrying the saffron flag. This is a popular right-wing image used to show India as a Hindu Rashtra (Hindu Nation). Mandir Wahi Banayega is the infamous right-wing chant that asserts their agenda of building a temple for Hindu god Ram at Ayodhya in the exact spot where Babri Masjid (Babri Mosque) once stood. The mosque was dismantled by right-wing soldiers called Kar Sevaks in 1992. Another shows a picture of Prime Minister Narendra Modi on her shirt.

In September 2017, Shehla’s picture was used by Times Now channel to insinuate that she and others from JNU were affiliated with ISIS, (Islamic State of Iraq and Syria) the Muslim terrorist organization. Times of India, the largest circulated daily in India had run a front-page story saying the same. At the time, Shehla had said about the incident, ‘By suggesting that we are somehow affiliated with ISIS, @TimesNow is putting our lives in danger. This is shameful and criminal.’

Fake news in the form of fake tweets has been circulated against Shehla exactly around the time of important movements and protests she has been a part of. Around the time Shehla and others were demanding a report on the disappearance of Najeeb, a Muslim student of JNU who went missing after an altercation with ABVP activists, fake news was spread by Times Now saying that Najeeb had joined ISIS.

When Shehla was involved in the fight against sexual harassment by Professor Atul Johri of JNU, fake tweets shown to be Shehla’s that said that she was against Johri because he spoke against Muslims were circulated. Most of the time, it is Shehla’s identity of a Kashmiri Muslim that is targeted in fake news. On another occasion, she was sexually harassed through a fake tweet that made comments on her sex life and connected it to Kanhaiya Kumar of JNU.

Right-wing outfits have been targeting many people both dead and alive through their doctored content. M K Gandhi, who is known as the Father of the Nation, Jawaharlal Nehru, the first Prime Minister of India and celebrities like A. R. Rahman have been subjected to this activity that has become a growing concern for journalism itself in the country.

Activists and even journalists who have been vocal against BJP and Rashtriya Swayamsevak Sangh (RSS – the Hindu fundamentalist umbrella party under which BJP functions) have also been targeted.

In 2016, three students of JNU were arrested on sedition charges based on a video circulated by a news channel called Zee News. Two of these videos aired by the channel were later found to have been doctored. The manipulated content showed the students raise slogans that the police said were ‘anti-national’ in nature. Kanhaiya Kumar, Umar Khalid and Anirban Bhattacharya were the three students who were arrested during the time.

In 2017, BJP’s national IT department head, Amit Malviya, had himself justified the use of fake news by the party to spread communal violence. In connection with the communal violence that erupted in West Bengal in July 2017, he had said, ‘It is a norm to use images for representational purposes unless a picture conveys a meaning drastically different from the text of the matter. This was said in connection with Delhi BJP leader Nupur Sharma who had posted a picture of the 2002 Gujarat on social media with the hashtag #SaveBengal at the time. Tarun Sengupta, the BJPâ€™s IT cell secretary from Asansol had been arrested for propagating fake news in Bengal at the same time. Malviya had condemned the arrest.

In April 2018, Sanjukta Basu, blogger and photographer was targeted by a news channel Times Now which is known for its pro-right wing journalism. She has sent a legal notice to the Editor-in-Chief Rahul Shivshankar and anchors Vineet Jain and Navika Kumar who carried the malicious story about her, using her photographs, misquotes and other digital material calling her a Hindu hater.

In Shehla’s case, this time, the perpetrators seem to have used her followers for right-wing propaganda as opposed to the earlier instances where fake news was used to paint an ‘anti-national’ image of the victims.

Recently, India had dropped 3 places in its ranking in the World Press Freedom Index. The reason stated read, â€˜With Hindu nationalists trying to purge all manifestations of â€œanti-nationalâ€ thought from the national debate, self-censorship is growing in the mainstream media.â€™