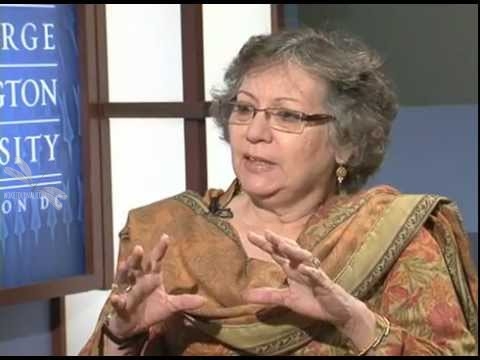 Moneeza Hashmi, media person, activist and daughter of renowned poet Faiz Ahmed Faiz was denied permission to speak at the 15th Asia Media Summit in New Delhi, India by the Government of India. The event that was organized byÂ Asia-Pacific Institute for Broadcasting Development was hosted by the Union Ministry of Information & Broadcasting (I&B) and was held on 10-12 May 2018. Moneeza Hashmi is one of the leading advocates of peace between Pakistan and India. She was officially invited to the event but was later denied permission due to the intervention of the Ministry of I&B, according to reports.

Hashmi was scheduled to speak at the event on May 10 but upon her reaching the hotel, she was told that there was no booking under her name. Later she was told by the organizers that she would not be allowed to speak or attend the dinner for delegates. On May 12, Hashmi’s son, Ali Hashmi took to Twitter to write about the shameful incident. Tagging the Prime Minister’s office and External Affairs Minister, Sushma Swaraj, he asked, ‘This is your shining India?’

@PMOIndia @SushmaSwaraj
This is your #ShiningIndia??
My 72 year old mother, daughter of #Faiz denied permission to participate in conference after being officially invited#Shamehttps://t.co/9bnc0E2OZd

‘My 72-year-old mother, daughter of #Faiz denied permission to participate in (the) conference after being officially invited,’ he said, saying that the incident was a shame. After the news got out, many from India called out the Narendra Modi government and its undemocratic behaviour and pettiness.

As more and more Indians started apologising for the behaviour, Ali Hashmi again tweeted, ‘And to those Indian friends apologizing on behalf of their government, don’t. We know what you are going thru. We have lived through it as well. You don’t owe us any apologies.’ In his article about the incident, he said, ‘We believe that this flagrant violation of the rights of an honoured guest and of basic sub-continental hospitality in no way represents the opinions and attitudes of the vast majority of Indians (and Pakistanis).’

Faiz Ahmed Faiz was a legendary Pakistani poet who was a staunch Leftist. He was one of the most celebrated writers of the Urdu language. From British India to the now separated India and Pakistan, Faiz was aÂ  strong proponent of peace and secularism who was deeply upset with and fiercely opposed the military rule in Pakistan.

Moneeza Hashmi and the Faiz foundation have been vocal about these issues in the same manner. Hashmi is known for standing up against the military rule and working towards women empowerment in Pakistan. She is one of the first women in media in Pakistan.

It has been reported that the Faiz Foundation had initially tried to keep a lid on the incident as they did not want India-Pakistan relations to be further adversely impacted.

After the news got out, many media persons and activists condemned the act of the government. The Ministry of I&B has denied their involvement in the incident. Senior advocate Prashant Bhushan wrote, ‘Shame on the Modi government for deporting Daughter of Faiz Ahmed Faiz from India and stopping her from participating in the Asia media summit in Delhi. Faiz was not only an outstanding Urdu poet but also a staunch opponent of the military rule in Pakistan.’

In a note written to a friend, Hashmi said about the incident, ‘Thank you for your and other friends support. I leave it to your judgement to deal with this matter. We the Faiz Family and Faiz Foundation will continue to work for peace between our two countries. As Faiz would say Ù„Ù…Ø¨ÛŒ ÛÛ’ ØºÙ… Ú©ÛŒ Ø´Ø§Ù… Ù…Ú¯Ø± Ø´Ø§Ù… Ú¾ÛŒ ØªÙˆ ÛÛ’
(lambi hai gham ki shaam magar shaam hi to hai – the evening of melancholy is long but it’s an evening nevertheless)

Facebook Messenger Will Automatically Translate Messages From Your Spanish Friend