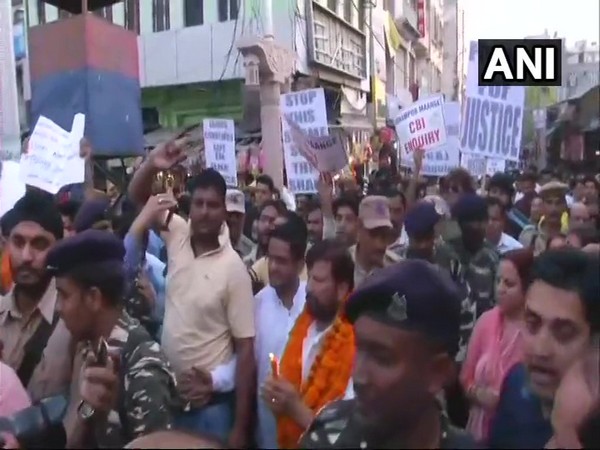 Former state minister and senior Bharatiya Janata Party (BJP) leader Choudhary Lal Singh on Sunday (May 21, 2018) took out yet another march in support of those arrested for the rape and murder of 8-year-old Bakerwal Muslim girl, Asifa Banu. About 25,000 people participated in the rally that started from Lakhanpur and went all the way up to Kootah Morh in Hiranagar area of Kathua district (nearly 35 km) seeking a Central Bureau of Investigation (CBI) probe into the case, a demand that the Hindus of the region who support the jailed accused have been raising since the day of arrest.

Choudhary Lal Singh was one of the MLAs who was forced to resign for having taken part in a similar rally by a right-wing Hindu outfit called Hindu Ekta Manch in January 2018 in Hiranagar area. Another BJP leader Chander Prakash Ganga had also resigned for the same behaviour. Another BJP MLA, Rajiv Jasrotia who had participated in the rally was later inducted as a minister in the Jammu and Kashmir cabinet.

Asifa’s rape and murder had given rise to massive protests in the country not only because of the brutal nature of the crime but also because of the support the perpetrators had from the ruling right-wing Hindu fundamentalist party, BJP. The rape itself was done inside a Hindu temple and was presided over by the temple priest. The open declaration of support by the Hindus of the region along with the support from political leaders like Lal Singh and Ganga had led to a nationwide uprising against protection of rapists by BJP.

In the latest rally held on Sunday, the former minister said, â€˜we cannot tolerate it if anybody calls Dogras rapist and criminals, we have a history. People of Jammu have a history, their history is being written in black ink. They (Kashmiri Muslims) kill pilgrims and then shed crocodile tears.â€™ Dogras are the upper caste Hindus of the region to which the perpetrators belong. It was stated in the charge sheet that the plan of raping and murdering Asifa was hatched with the intention to drive away the nomadic tribe of Bakerwal Muslims who use the Dogra land for grazing horses and cattle as they don’t have permanent residences or land.

Singh, who is the BJP MLA from Basholi and former forest minister threw a challenge to politicians of Jammu to take care of the feelings of the people. He said that the arrest of the eight accused in the case was a matter of ‘honour’ and ‘dignity’ of Dogras. He also warned that the large rally was just a ‘trailer’ and that the film was yet to come. He said that if the matter was not resolved, he would call for an all Jammu bandh (shut down). Similar to the earlier march that was carried out by ‘Hindu Ekta Manch,’ this one was held under the banner of ‘Dogra Ekta Manch.’

After the police arrested the accused, the right wing Hindus have been constantly demanding that the case be transferred to CBI. The Supreme Court of India had rejected this plea. The demand itself was considered to be an open assault on democracy as it suggested that CBI only operated under the command of the ruling government, in this case, BJP.

Meanwhile, a forensic report by the police has found that the signature of Vishal Jangotra, one of the accused in the rape and murder of the minor does not match the one which he claimed to have signed in an exam attendance sheet in Meerut to claim that he was not at the crime scene.