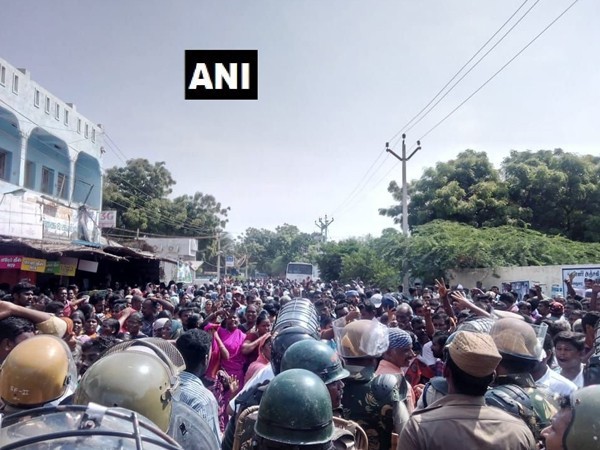 Tamil Nadu government is waging a one-sided war against its people while supporting Sterlite Copper of Vedanta Business group. With one more death reported today, (May 24, 2018,) 13 people have died in police firing and many more are hospitalised. On Wednesday, (May 23) yet another protester was shot dead by the police. This was after 10 protesters were shot and killed during the protest on Tuesday (May 22, 2018). 67 protesters have been arrested by Tamil Nadu police.

Since May 23, Wednesday, internet services have been suspended in Thoothukudi. The News Minute reported that telecom operators were sent a directive from the Chief Secretary to block mobile data/internet services in three districts of Tamil Nadu â€“ Thoothukudi, Tirunelveli and Kanyakumari districts. Voice calls have not been barred.

Meanwhile, a WhatsApp message that is being circulated on social media and other networks spoke of the violence that the protesters have been made to endure. Calling the attack by Tamil Nadu a ‘state-sponsored massacre,’ the message said that the Vedanta group was owned by a close aide of Prime Minister Narendra Modi by the name Anil Agarwal. The message also said that the police specifically targeted the organizers of the protest against Sterlite plant and killed six of them. Of the total 13 state-sponsored murders, one is that of a 17-year-old girl, it said.

An emergency petition has been filed by advocate Suryaprakash at the Madras High Court demanding appropriate medical treatment to those injured in the police firing. It also asks the court to revoke the suspension of internet services, set up a committee under a district judge and to order a Central Bureau of Investigation (CBI) probe into the matter. Justice Bhavani Subbarayan has allowed to the case to be heard on an emergency basis, Firstpost reported.

What is the Current Status of Sterlite Copper Company in Thoothukudi?

The Tamil Nadu State Pollution Control Board has ordered the closure of the copper smelter plant in Thoothukudi and saying, ‘renewal of consent for the year 2018-2023 (for the company) has been rejected vide reference third cited due to non-compliance of the certain conditions imposed in the previous renewal of consent order issued to the unit vide reference first cited.’ However, questions are now being raised about the connivance of the Pollution Control Board in the earlier years and as to why it took so many innocent lives for them to act.

Environment activist Fathima Babu had filed a petition seeking to stay the proposed expansion of the plant in Madras High Court. The Bench comprising Justices M Sundar and Anitha Sumanth stayed the proposed expansion. Fathima’s petition stated that the original environmental clearance and renewals were illegally obtained by the company. This was done by exempting themselves from public consultation by misrepresenting the location of the project as being within a ‘notified Industrial Estate/Complex,’ the petition stated. ‘This incurable defect strikes at the very foundation of the clearance and is a violation of substantive rights of the people of Thoothukudi and their fundamental right to a clean and safe environment,’ she had argued.

What is Wrong With Sterlite Copper and Vedanta Ltd.?

People of Thoothukudi have been fighting against Vedanta and Sterlite Copper for years. Starting from 1997, the residents of the place have been reporting various ailments and problems resulting from the gases, smoke and other residues emitted by the company. Workers losing lives and being injured are dangerously common in Sterlite Copper. A list of deaths and injuries in the Newsminute show the gravity of the situation to which Tamil Nadu government is feigning ignorance.

According to the report, 17 people have been killed (this is apart from the ongoing government killings of protesters) and a number of people have been injured in the period of operation of this factory just between 2010 and 2013. There have been many instances when the poisonous gases have leaked and affected those who inhaled it. The legal battles that went all the way to the Supreme Court of India managed to shut down the factory a number of times but it always reopened with the help of clearances from the state administration.

On March 24, 2018, tens of thousands of Thoothukudi residents had flooded the streets demanding immediate closure of Sterlite Copper that has been polluting Thoothukudi for two decades.

An injured worker, who was denied compensation by Sterlite Copper had attempted suicide in front of the factory on May 13, 2018.Â Kartheepan, the 31-year-old employee was injured in a workplace accident more than a year ago. The accident had made him permanently disabled and the company was called out for ignoring safety rules deliberately and not paying sufficient amount as compensation.

This brought attention to the ongoing strike of the people against Sterlite and Vedanta. Sterliteâ€™s parent company, Vedanta Ltd. specialises in mining and refining non-ferrous metals â€“ copper, zinc and aluminium. The Thoothukudi plant is a copper smelter complex. In 1993, the same company was denied permission to run its plant in Maharashtra after protests by the people there that lasted a year. A government-appointed committee had, back then, found that such industries would endanger the regionâ€™s fragile coastal environment.

However, the same company was cleared with a No Objection Certificate (NOC) by the Tamil Nadu Pollution Control Board (TNPCB) in 1994. The Ministry of Environment and Forests issued an Environmental Clearance in 1995 for Sterlite Copper.

Various studies in the country have linked health issues including miscarriages and cancer to pollution by Sterlite. Apart from this, in 2007, the Norwegian Council of Ethics blacklisted Vedanta as the company was found in violation of established norms of human rights, worker safety and environmental diligence.

News reports, photographs and videos from the attack on protesters have pointed towards a planned operation. Police was seen taking aim and shooting people. Protocol had been violated as well.

The National Human Rights Commission (NHRC) has filed a petition in the Delhi High Court to order an inquiry into the police killings in Thoothukudi. It has also issued notices to Tamil Nadu chief secretary and the director general of police, asking them to submit a detailed report in two weeks.

NHRC said, ‘It also appears from several media reports, including those on TV news channels, that the police resorted to firing on unarmed protesters without following the standard operating procedure, which tantamounts to serious violation of human rights and thus is a matter of concern.’

Amnesty International India on Wednesday condemned the Tamil Nadu Police’s attack on anti-Sterlite protest terming it a ‘damning indictment’ of the state government.

Lawyers staged a protest in front of CuddaloreÂ district court against actions of the police, central and state governments in Thoothukudi. Dravida Munnetra Kazhagam (DMK) has announced that it will observe a statewide shutdown tomorrow (May 25), as a mark of protest against the killing of 13 people and the All India Anna Dravida Munnetra Kazhagam (AIADMK) led Tamil Nadu government. DMK working president M K Stalin demanded the resignation of Chief Minister K Palaniswami and state police chief TK Rajendran. Stalin has been evicted from the Secretariat premises in Chennai and detained after he staged a dharna outside the Chief Minister’s office. DMK is also demanding that the Sterlite copper smelter plant in Thoothukudi be shut down permanently.

The Communist Party of India (Marxist) demanded ‘immediate legal proceedings’ against those who ordered firing on protesters in Thoothukudi. Congress president Rahul Gandhi alleged that Tamils were being killed as they had refused to “bow” to the RSS ideology.

‘The incident is due to the total negligence of the government. I strongly condemn the unlawful activities by the police,’ the actor said in a video message that was shared on his official twitter handle.

US makes new terms for violence reduction in Afghanistan