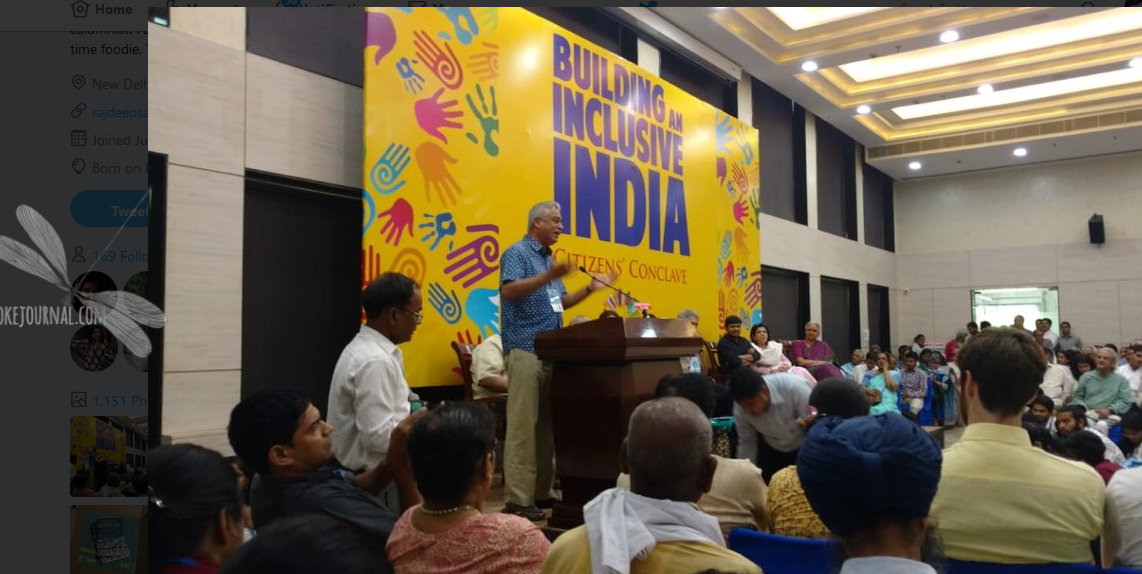 Senior journalist Rajdeep Sardesai has come out on social media as a Savarkar supporter. While he had, in the past declared Savarkar a freedom fighter, the latest tweet from the media person has managed to dispel any ambiguity that might have existed regarding his right wing leaning and has successfully established himself as one among the many public figures joining the RSS bandwagon. This has come as a shock to many of his followers who considered him a spokesperson of secularism and inclusivity. V. D. Savarkar was a staunch Hindu fundamentalist.

While the complicity of media houses in propagating Hindutva in exchange for money is being discussed in the country, Sardesai’s tweet has made it clear that endorsements, whether paid or not, have penetrated the ‘secular’ media circle as well. Sardesai’s tweet from May 28, 2018, celebrated Savarkar’s 135th birth anniversary and called him a ‘freedom fighter,’ ‘patriot,’ ‘writer,’ and ‘Hindutva nationalist.’ It asked people to pay a visit to his cell in Port Blair ‘to realise how our freedom fighters were tortured,’ and called his politics ‘divisive but heroic.’ The post has drawn harsh criticism from all secular quarters for the praises showered upon a Hindu fundamentalist who also had a role in the assassination of freedom fighter and ‘Father of the Nation,’ M K Gandhi.

135th birth anniv of Savarkar: freedom fighter, patriot, writer, Hindutva nationalist.. divisive but heroic.. do pay a visit to his cell in Port Blair to realise how our freedom fighters were tortured.. #Savarkar

V. D. Savarkar is considered to be the most revered icon of Rashtriya Swayamsevak Sangh, (RSS) the Hindu fundamentalist party and its various Hindu nationalist outfits and branches including the ruling Bharatiya Janata Party (BJP). History marks Savarkar as a strong supporter of the British rule in India and sometimes even as a ‘spy’ for having pledged his allegiance to the British in exchange of his freedom from prison.

Hindutva politicians including Prime Minister Narendra Modi consider him a hero. Right-wing leaders are often seen celebrating Savarkar’s birth anniversary similar to the manner in which Sardesai did it. In 2015, Narendra Modi’s tweet celebrating his birth anniversary had him calling Savarkar ‘the true son of Mother India.’ Around the same time, Sardesai had come up with a tweet along with many others who joined Modi and had said, ‘Respect to Veer Savarkar whose birth anniv is today: disagree with his ideology, honour his spirit as freedom fighter.’

In 2018, after 4 years of BJP rule, Sardesai’s tweet has drawn more criticism than in 2015 possibly because of the boom in Hindutva violence after Modi’s coming to power in 2014. Many incidents, especially many murders of Muslims, Dalits and other minorities that rose in number, have Hindu fundamentalism that Savarkar preached as its founding principle. This direct link existing, Sardesai’s making clear that he is on Savarkar’s side has been condemned. Following the criticism, Sardesai also issued another tweet saying he had ‘learnt lesson’ and would be ‘more careful next time!’

Reactions ran from disbelief to rage. ‘Please tell us about the great virtues of Hitler, too. I especially love the “patriot” & “freedom fighter” part,’ said one of the Twitter users. Another was quick to point out how Hindu nationalists chose Savarkar as their leader primarily because of his caste. Sardesai himself was once caught in a casteist tweet when he congratulated Manohar Parrikar and Suresh Prabhu on their cabinet positions stating their caste as his own. ‘Big day for my goa. Two GSBs, both talented politicians become full cabinet ministers. Saraswat pride!!’ he had tweeted. GSB stands for Goud Saraswat Brahmins, the caste to which the politicians and Sardesai belong. When questioned on his casteism, he had said ‘proud GSB, proud Goan, proud Indian. No contradiction.’

Sardesai’s tweet comes at a time when Indian media houses and media persons who refuse to join the RSS group and promote their agenda are being attacked for their stance.

No existence of drug mafia in Goa: CM