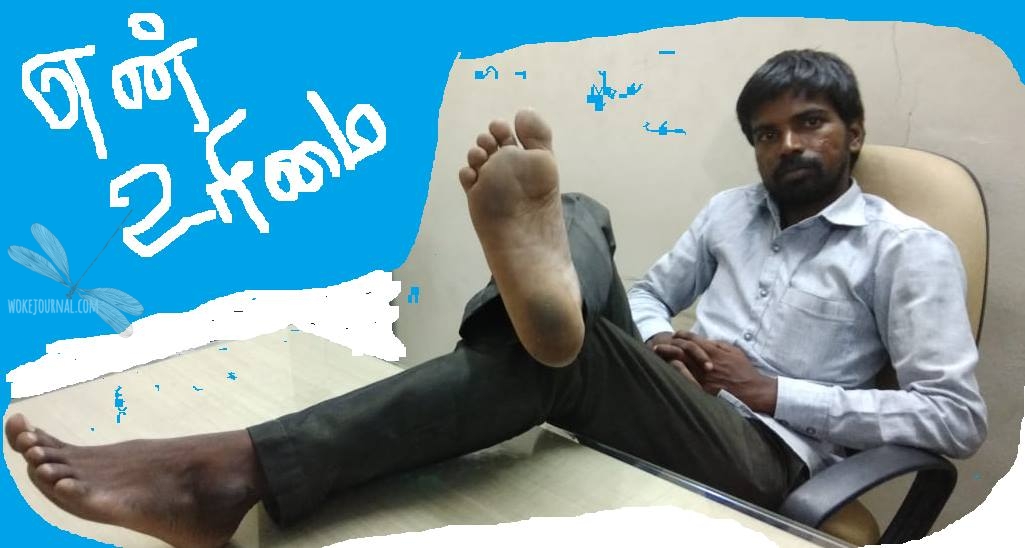 As a mark of protest against the murder of two Dalits and attack on the Dalit community by upper caste hindus for sitting cross legged in front of them, Dalits are posting their pictures with their legs crossed with the hashtag #kaalmelakaal_gethuda on social media.

The attack on the Dalits that resulted in two being killed was unleashed by caste Hindus on Kachanatham village near Manamadurai in Tamil Nadu on Monday night (28 May 2018). K. Arumugam (65) died while being taken to Tiruppuvanam Government Hospital and A. Shanmuganathan (31) succumbed to injuries on the way to Government Rajaji Hospital (GRH), Madurai. All the injured were admitted to GRH.

The village is a Dalit populated area with 35 Dalit families and two caste Hindu families. The ‘reason’ stated for the attack that was carried out by a 15 member armed gang of upper caste people was that the Dalits had refused to present temple honours to a caste Hindu family and had sat cross-legged in front of a caste Hindu. Chandrakumar (45), a caste Hindu objected to this and abused the Dalits for ‘insulting’ him.

In highly conservative upper caste cultures, sitting cross-legged is often attributed the quality of ‘impertinence.’ The unsaid rule is applied to mostly women and young people while in front of adults and elders. In general, the posture is said to be that of authority.

After the police booked Chandrakumar under Section 294 (b) (uttering obscene words) of the IPC, his son C. Suman (19) decided to take revenge. With the help of his friends from Avarankadu and nearby villages, he went to Kachanatham and carried out the brutal attack, the police said. The attackers also damaged tiled roof and furniture in some houses in the village.Â Apart from the murder of two, the gang also inflicted serious cuts on at least six others, the Hindu reported.

More than 100 villagers staged a sit-in protest atÂ Panagal Road in Madurai on Tuesday, demanding justice for those killed and injured, the Hindu reported. The protesters demanded compensation to the family of the deceased and a government job to at least one member of each family of which someone was injured

However the ‘reasons’ stated for the attack and murder seem to be a facade for the issue of marijuana sale in the area. The Indian Express quoted Communist Party of India (Marxist) leaderÂ Kandasamy M as saying that the attack occured after Dalits protested against the sale of marijuana in the area by people from a neighbouring village. Arguments during the recent temple function saw Dalits being threatened by a section of Thevar community from the neighbouring village, he said. Some of the pictures posted online also allude to the marijuana connection, indicating that that was the real reason for the attack.

The police have detained five accused and five others have surrendered before a Madurai court, the SP said. Villagers told the Indian Express that they had informed the local police station at Palayannur that the Dalits were under threat but no action was taken. They said that it was a common practice that when such threats are reported the police ‘settle it in a kangaroo court without registering a case or taking action.’

The National Commission for Scheduled Castes had sought a report from the Collector and the SP.