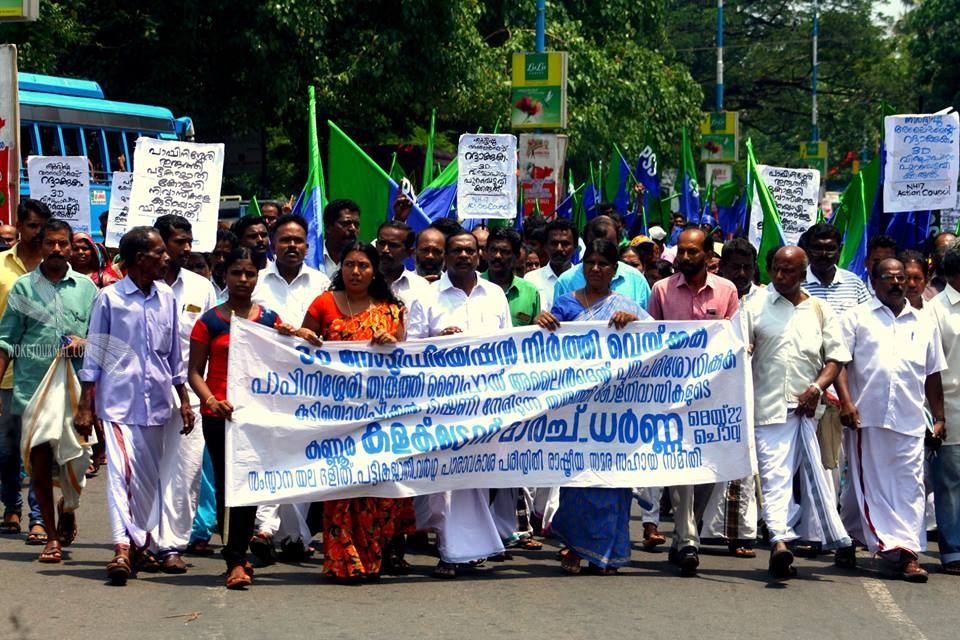 The 3D alignment of National Highway through the Dalit colony of Thuruthi in Pappinisheri has received stay order from The Kerala high court. The court intervention comes as a response to the civil writ petition filed by A Pradeep, a native of Thuruthi. The state of Kerala, Special Deputy Collector of Kannur district, district collector Kannur and National Highway Authority of India have been listed as the opposite party and have received notice from the court.

The honourable Kerala High Court hasÂ directed the respondents not toÂ acquire and proceed against the property of petitioner and to withhold any further action until the dismissal of the writ petition before the court.

Around 1200 Dalits of Thuruthi village in Kannur were being asked to leave their homes for the purpose of building a National Highway over their land in what the government calls â€˜developmentâ€™. They have been protesting against this move for a month now. The Dalit families had said that the National Highway Authority of India had found a suitable alignment that did not go through their lands but it was redesigned after government officials visited the village for an initial survey of the land.

Thuruthi is a place which is rich in mangroves and wetlands. This NH alignment in the name of development is set to destroy the environment. “The current NH allignment which goes through the Dalit colony has a curve which is against the regulations of National Highway Authority of India,” writer and Dalit activist Rupesh Kumar told TWJ.

Apart from the residents, the world-famous art form of Theyyam is also under threat, said the artists who had joined a human chain to protest against the alignment on 23 May 2018.

The court has also directed to file statements regarding the details of land acquisition in two weeks. The struggle led by the natives including women, children and the old has been going on for a month. The protesters lauded the order as a historic victory for the mass struggle. Judge Shaji P Chali considered the petition and issued the order.

[…] thoughÂ temporary relief was bestowed on them by theÂ High CourtÂ order of stay on land acquisition, the government and collector of Kannur continue to stand by their move […]

[…] the 3D alignment of the National Highway through the Dalit colony of Thuruthi in Pappinisheri had received a stay order from the Kerala High Court on June 2. The court intervention was a response to the […]