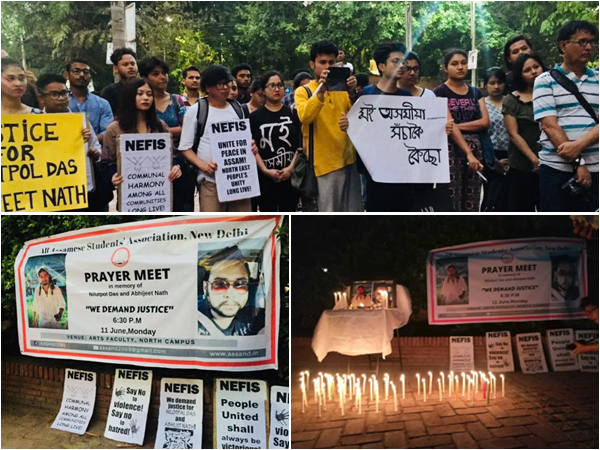 Members of the All Assamese Students Association in New Delhi recently held a prayer meet in memory of Abhijeet Nath and Nilutpal Das, who were lynched in Assam’s Karbi Anglong District last week.

Both were killed because villagers thought they were child abductors.

Public outrage over the lynching has been at its peak, with demonstrators across the state demanding justice for the families of Nath and Das.

Condemning the death, the students’ association urged the government to punish the culprits as soon as possible.

The prayer meeting was held at the Arts Faculty, North Campus, Delhi University, and was attended by a large number of students and professionals.

Subhrajyoti Duarah, a member of the association, said, “We all Assamese Students Association members insist for immediate punishment of the perpetrators. The action taken by the administration so far is unfortunate. We are really ashamed and afraid to extend an invitation to people to visit Assam which is no longer safe for its own people. This is something most saddening.”

Duarah added that the comments made by the District Commissioner of Karbi Anglong were also very unfortunate and demanded that he apologise.

Karbi Anglong Deputy Commissioner Mridul Kumar Mahanta faced flak on social media for his ‘irresponsible’ and ‘insensitive’ statements over the lynching of two youths of Guwahati at Kangthilangso, which falls under the jurisdiction of the Dokmoka police station

Debashish Kashyap, Vice President of AASA, told media, “We want justice and we don’t want any communal riots in Assam, neither we are against any community. At the same time, we urge the youths not to take any action that would harm the social fabric of the state. I believe an immediate probe by police should be carried out on the matter and more particularly on the officials of the district.”