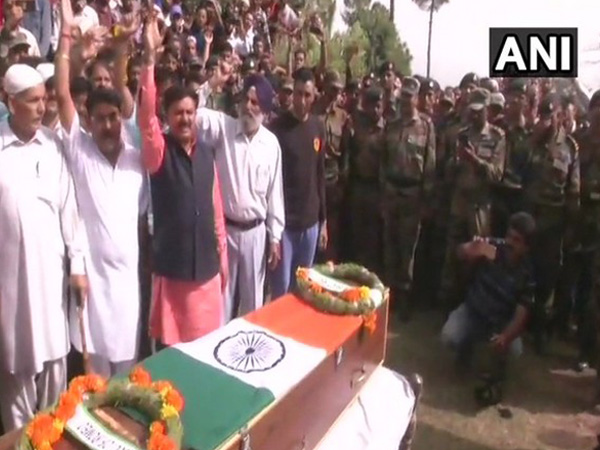 Mohd Hanif, the father of Rifleman Aurangzeb, who was abducted and later killed by terrorists in Pulwama’s Gusoo, made an emotional appeal to the Centre and the Jammu and Kashmir government to eliminate militancy from the state, as he laid his son to rest.

Speaking to media, Mohd Hanif said his son sacrificed himself for the nation and added that not only Jammu and Kashmir, but the whole nation is feeling the pain of his loss.

“My son has abided by his pledge, he kept his promise. He sacrificed himself for the nation and came back to me. I request central and state governments to eliminate militancy,” he said.

Scores of people bid a tearful farewell to Aurangzeb at his native village in Jammu and Kashmir’s Poonch district on Saturday.

While the jawan was laid to rest with full state honours, locals raised slogans of ‘Shaheed Aurangzeb amar rahe’ (May Aurangzeb remain immortal) at the last rites ceremony. Furthermore, locals raised anti-Pakistan slogans to express their outrage over Aurangzeb’s killing.

The Rifleman’s bullet-ridden body was recovered from Pulwama district on June 14, hours after he was abducted by terrorists.

The deceased Army man was proceeding towards his home on account of the festival of Eid when he was abducted in broad daylight from a vehicle.

After his abduction, the Jammu and Kashmir Police had launched a massive manhunt.

Aurangzeb belonged to 44 Rashtriya Rifles and was posted in Shopian.

Democrats warn Trump ‘no fooling around’ with impeachment