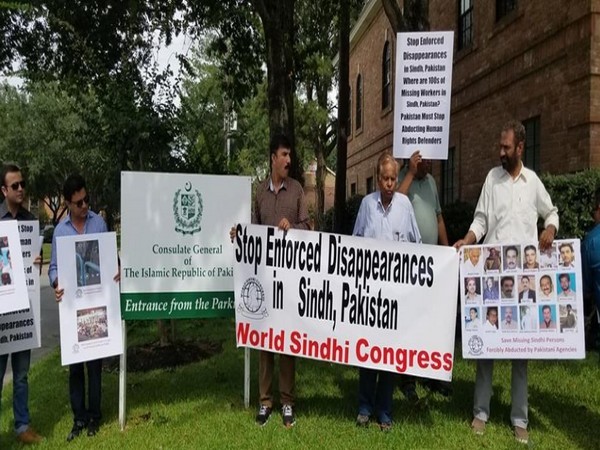 The World Sindhi Congress (WSC) recently organised demonstrations in front of the Pakistani Consulates in Houston, New York, and Los Angeles against enforced disappearances in Sindh and other parts of Pakistan.

The protests were aimed at raising awareness amongst American public about the heinous practice of enforced disappearance perpetrated by the security agencies of Pakistan in its Sindh province.

For several years, the enforced disappearances have continued in the region; more than 1,200 people belonging to different communities have gone missing. Since last year there has been a surge in illegal detention of people in Sindh.

Reportedly, since February last year, around 170 people have forcibly disappeared.

“Unfortunately, the enforced disappearances are being used as a tool to silence political dissent and to feed fear in people of particular ethnic backgrounds,” said Dr. Saghir Shaikh, organiser of the WSC.

Members of the WSC and the Sindhi Association of North America (SANA) along with their families participated in public protest.

“People are taken into custody in broad daylight much in the way of kidnapping; they are kept incommunicado for months and years,” said Farhan Kaghzi. “Security agencies operate with utmost impunity,” he added.

Dr. Safdar Sarki, a US Citizen, who suffered two years of torture and detention in General Musharraf’s regime, spoke about the systematic abuse of Sindhi nationalist party workers and other human rights defenders, “While hundreds of them have been kidnapped, several dozens have been victims of extra-judicial killings.”

WSC prepared and presented a memo regarding the enforced disappearances to the Pakistani Consulate General of New York and Houston. However, the consulate staff in Los Angles refused to take the memo.

Protesters demanded the Government of Pakistan to end human rights violations and release all those who have gone missing from Sindh, Balochistan, and Khyber Pukhtoonkhwa. They demanded that if missing persons are involved in crimes or anti-state-activities then they must be presented in courts of law and given a chance of fair trials, as it’s their fundamental right.