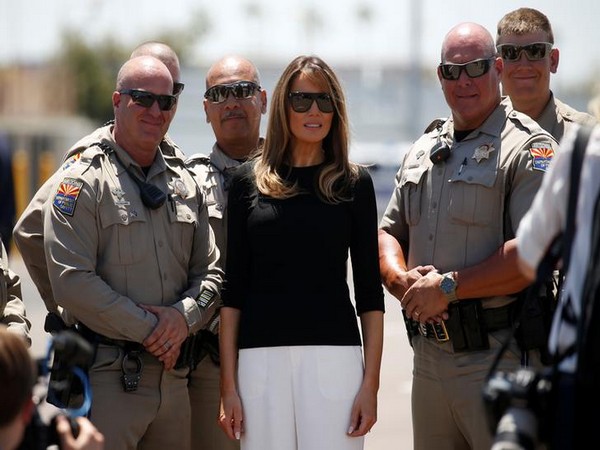 The United States First Lady Melania Trump visited an immigrant holding facility in Tucson, Arizona as she returned to the US-Mexico border region for the second time in a week.

Melania first visited a US customs and border patrol facility, where she participated in a round-table conference with border patrol officials, immigration and customs enforcement, the US Marshals Service and a local rancher, the Hill reported quoting a press pool report.

She then visited Southwest Key migrant facility in Pheonix, where she interacted with children before participating in a short round-table discussion.

Her visit to the migrant centre invited protests from the public with banners such as – “Impeach Donald Trump”, “End All Cages” and “Free the Parents and Children”, along with a dummy of US President Donald Trump.

The first lady is likely to visit the Tucson Coordinating Center, a short-term holding facility for migrants, according to the pool report.

Last week, Melania made headlines after she was spotted wearing a green jacket that read – “I REALLY DON’T CARE, DO U?” during her first border visit in McAllen, Texas.

However, the first lady has not worn the jacket on her current trip.

Melania’s Arizona visit comes after her husband Trump signed an executive order to “keep families together” on June 20, amid the massive backlash over his administration’s policy of separating children from their parents at the US-Mexico border.

“We’re signing an executive order. I consider it to be a very important executive order. It’s about keeping families together, while at the same time being sure we have a very powerful, very strong border,” CNN quoted Trump, as saying.

“The border is just as tough. But we do want to keep families together. We are keeping the family together,” he added.

The US president defended his policy of separating children from their families who have been illegally crossing the southern US-Mexico border, saying, to prosecute parents for illicit entry, “you have to take the children away.”

Attorney General Jeff Sessions announced a new “zero-tolerance” policy on the border in April to prosecute immigrants for entering the country illegally.

Parents have since been arrested and placed in quick federal court proceedings near the border, while children are placed in shelters.