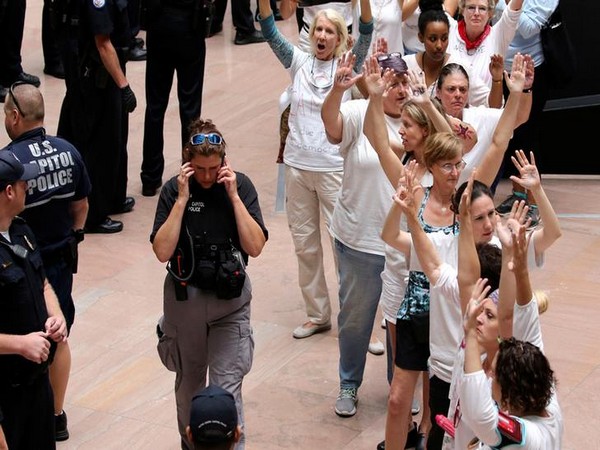 The United States Capitol Police on Thursday arrested 575 people, including a congresswoman for “unlawfully protesting” against President Donald Trump’s immigration policies and family separations at the US-Mexico border.

The demonstration took place in the heart of the Hart Senate Office Building, where the protestors were opposing Trump’s “Zero Tolerance Policy”, which treats illegal border crossings as criminal offences.

The Capitol Police said that they have charged the protestors and are interrogating them before being let go, CBS News reported.

A Democrat from Washington D.C., Pramila Jayapal, who was among those arrested by the police, said that 500 women had gathered to protest against Trump’s “inhumane and cruel” zero-tolerance policy.

In a video posted on Twitter, Jayapal said, “I just got arrested with a group of, I don’t know exactly how many, but over 500 women. At least 500 women who took over the center of the Hart Senate building, protesting the inhumane and cruel zero-tolerance policy of Donald Trump and this administration, the separation of families, the caging of children, the imprisonment of asylum seekers who just seek a better life.”

“These women understand, they’re from all over the country. It was organized by the women’s march and by the Center for Popular Democracy. And they understand that this is far beyond politics. This is about right and wrong, and we have to stand up and we have to put ourselves on the line,” she added.

On a related note, US First Lady Melania Trump visited an immigrant holding facility in Tucson, Arizona as she returned to the US-Mexico border region for the second time in a week.

Melania first visited a US customs and border patrol facility, where she participated in a round-table conference with border patrol officials, immigration and customs enforcement, the US Marshals Service and a local rancher, the Hill reported quoting a press pool report.

She then visited Southwest Key migrant facility in Pheonix, where she interacted with children before participating in a short round-table discussion.

Trump signed an executive order to “keep families together” on June 20, amid the massive backlash over his administration’s policy of separating children from their parents at the US-Mexico border.

The US president defended his policy of separating children from their families who have been illegally crossing the southern US-Mexico border, saying, to prosecute parents for illicit entry, “you have to take the children away.”

A federal judge has ordered that within 30 days, families separated at the border have to be reunited.