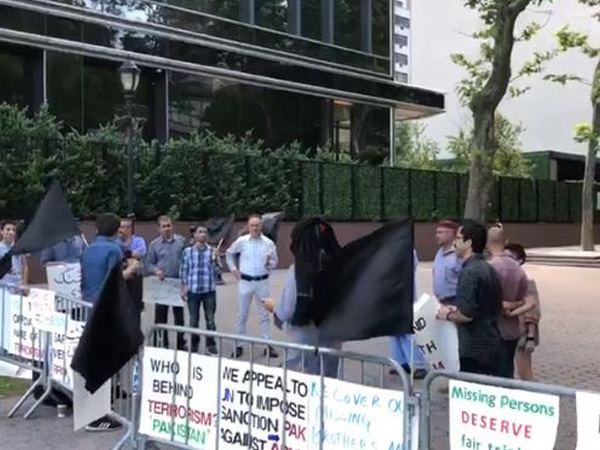 An anti-Pakistan protest was carried out by the members of the Pashtun Tahafuz Movement (PTM), a human rights movement of the Pashtun community against Pakistani security establishments, particularly the army, on its alleged human rights violations against them.

The PTM members blamed the Pakistani Army for the alleged human rights violations which have led to disappearances, displacements, bombardment, and extrajudicial killings of ethnic Pashtuns in Pakistan.

They appealed to the United Nations (UN) to put sanctions against the Pakistan Army by protesting outside the UN headquarters in New York on Friday (local time).

The protest was carried out in unanimity with the PTM activists.

The PTM activists denounced Pakistan, by raising slogans of disgrace such as – “I’m a student, not a terrorist,” “Who’s behind terrorism, Pakistan,” and “Stop Pashtun Profiling in Pakistan” and raised black flags.

The PTM also demanded the immediate recovery of missing persons and to put an end to Pakistani support to militant groups in the Pashtun areas of Pakistan.

It also demanded an investigation into the attacks and the involvement of the international community.

The activists also blamed the Pakistani Army for indulging with the local militants and targeting innocent Pashtuns.

Mujeeb Rehman, a Pashtun journalist said, “The purpose of the protest is to ask the UN to take notice of the human rights violations in Pashtunland, in the hands of Pakistan. As a journalist, I have been covering this movement in the last two months. After coverage, I’m now a human right activist.”

He added that he was born in Charsadda and requested the UN to “take a serious note of the human rights violations in Pashtunland as a victim of this war.”

Rehman underscored that the PTM is asking the UN for ensuring basic human rights such as the right to live with dignity.

Taking a potshot at former senior superintendent of police (SSP) of Malir district in Pakistan, Rao Anwar, he said, “Rao Anwar, the police officer killed 400 Pashtuns extrajudicially. I demand the UN take note because the Pakistani government is not doing enough to punish him. The government is treating him as a VIP, not a murderer.”

Rehman claimed that the Pashtuns were being harassed at checkposts, adding that there was a crackdown on PTM activists in Pakistan.

“Students are being put in jail and are being tortured. They wanted to protest against this brutality. There are cases against the students,” he further said.

Rehman finally asked the UN to take serious notice on the harassment of Pashtuns at check-posts, abductions, and extrajudicial killings and inquire the Pakistan government over the issues.

Another protestor, Wali Khan, was seen holding a banner which read – “UN must ask Pakistan to respect basic human rights.”