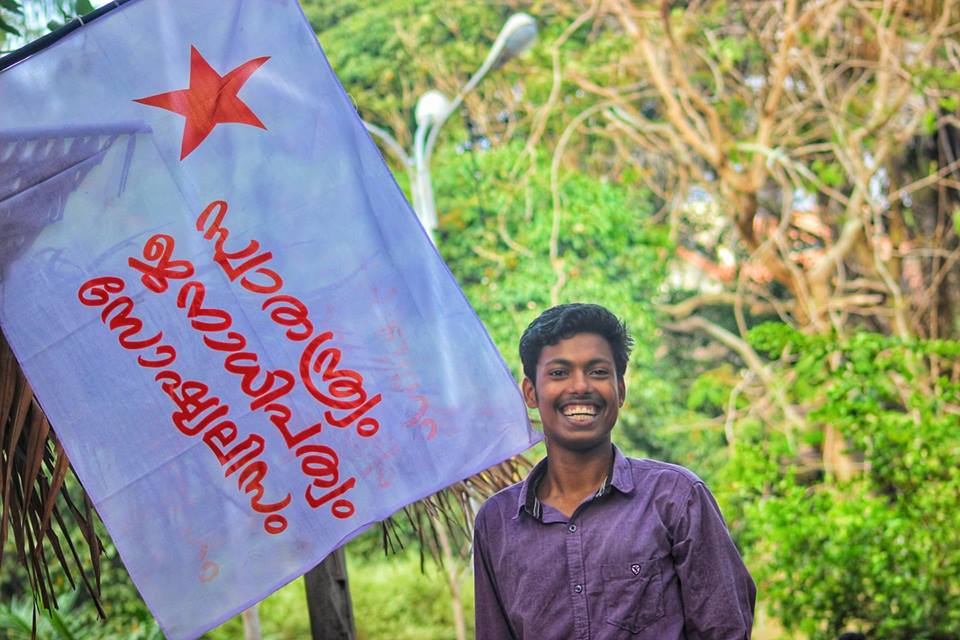 A second-year Bachelorâ€™s student of Maharajaâ€™s college in Kochi, Kerala was stabbed to death in a furore between SFI and Campus Front yesterday night at the campus.

Abhimanyu, 20 years, who hails from Vattavada in Idukki, from an indigenous community, was pursuing environmental chemistry in the campus and was an active member of the Students Federation of India (SFI).

The tussle between the members of both the parties, allegedly turned violent when a crowd of 15 CFI members attacked the SFI members which resulted in the brutal murder of Abhimanyu and left two others injured.

The issue leading to the incident began when one of the campus brick walls booked for advertisements by SFI was used by Campus Front students for their posters. SFI retaliated and wrote ‘communal’ over the CFI graffiti. The verbal fight soon turned into a violent clash, when Popular Front members infiltrated to the campus to strike back. Abhimanyu was allegedly stabbed in his chest leading to his death. Arjun, who got injured, was rushed to medical trust hospital and has survived the critical stage.

The Central Executive Committee of SFI condemned the incident. â€œBoth RSS and NDF are the two sides of the same coin. We appeal all the secular forces to condemn this dastardly killing of an innocent student leader by the NDF and Campus Front and isolate these murderers from societyâ€ read their statement. The CEC SFI also called for a nation-wide protest day to condemn the incident.

Speaking to TWJ, CEC member Nitheesh Narayanan said, â€œThe incident isnâ€™t an aftermath of the clash between students. To note here is the fact that Popular Front members from Kollam and Pathanamthitta are involved. They are in no way related to the campus. This is a well-planned murder. Area members of SFI who were protesting at Alappuzha were attacked as well.â€

Later, the march on 2nd July in Alappuzha turned violent in which area secretary Naujas of CFI, sustained stab injuries.

In his opinion, the fact that CFI are not even ready to condemn the issue shows their true self. â€œEven if a verbal fight happened, is this how you respond? What historical context can they lay down to justify this act? Both his parents are plantation workers from Idukki. He comes from an economically and socially underprivileged section. He is one of the first person to pursue higher studies from his village. It is all those struggles which went vain yesterdayâ€, he added.

When contacted, SDPI denied any involvement with the issue, while PFI leaders refused to comment. The three accused – Riyas, Bilal and Farooq – who were detained by the police have no association with the campus. Chief Minister Pinaray Vijayan condemned the incident and alleged that external elements from outside are behind Abhimanyu’s death.

Subscribe
Who will cry when you die?: The Brutal Murder Of A Young Student Leader in Kerala – The Woke Journal

[…] name to many in Kerala as the hometown of Abhimanyu, the 19-year-old student leader who wasÂ murderedÂ at Maharajas College on July 8. Kerala had watched the ordeal on their screens when […]