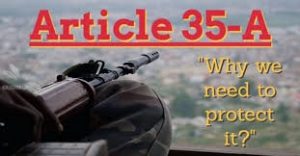 Srinagar: With the collusion of BJP-PDP government in the state of Jammu and Kashmir on
19 th June 2018. The state came under the governor rule from 21 st June. The break-up of PDP-
BJP government has brought the focus back on legal battle for protection of Article 35-A,
which empowers J&amp;K legislature to define permanent residents and allows them exclusive
right to buy land in the state.

All eyes will be on the defense when the case comes up for hearing in the Supreme Court next month. â€œWe expect the Governor to ask his government to fight the case with same zeal like we had done,â€ said senior PDP leader
Naeem Akhter.â€œThe state has a strong case and we should not be worried, but the only thing is that we
should not let it be decided by default and in such a scenario it can take us to the point of no
return.â€

Former advocate General Jahangir Iqbal Ganai in a statement said that â€œthe defense of the
Article 35A should continue as it was earlierâ€. Article 35A is the provision in Indian
constitution that grants exclusive state subject (full citizenship) rights and other privileges to
permanent residents of the state. This provision was added to the constitution through the
Constitution (Application to Jammu and Kashmir) Order, 1954, issued by the countryâ€™s first
president, Rajendra Prasad, on May 14, 1954.

The J&amp;K constitution, which was adopted on November 17, 1956, defined a permanent
resident as a person who was born or settled in the state before May 14, 1954, or who has
been a resident in the state for 10 years and had â€œlawfully acquiredâ€ immovable property in
the state before that.

Last year when the case came up for hearing in the Court, government of India decided not to
support the former PDP-led state government stand seeking dismissal of the petition.

Attorney general KK Venugopal, appearing for New Delhi, had told the court that given the
â€œsensitiveâ€ nature of the issue the government wanted a â€œlarger debateâ€ on the Article.
On the other hand the ruling BJP and RSS have been pushing for abrogation of both Article
35-A and Article 370 for a complete merger of J&K with union of India. With fall of the state
government earlier this month in which BJP was a coalition partner with the PDP, the former
is now expected to openly raise the demand, though mainstream parties including
National Conference and PDP have repeatedly warned New Delhi against any tinkering with
Article 35A.

In Kashmir, the protection of Article 35A has become a hot topic with separatists having
already warned of consequences if it was fiddled with. Legal expert and former advocate
general, M I Qadri said the previous state government had already taken a stand before the
Supreme Court on Article 35A. â€œWhether the present government will stick to that stand or
take a different view remains to be seen,â€ said Qadri, a former advocate general who heads
NCâ€™s legal cell.

According to him â€œmuchâ€ would also depend on who would be the next advocate general of
the state. â€œWe are very apprehensive at this stage and
canâ€™t say conclusively what will happen, but I expect the Governor will stick to the stand
already taken by the previous government which is in consonance with theconstitutional
spirit.â€

Iraqi Shia leader calls for scheduled pullout of US troops