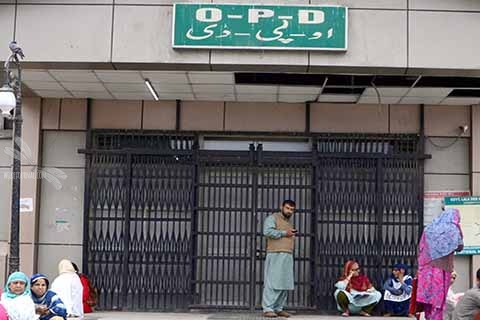 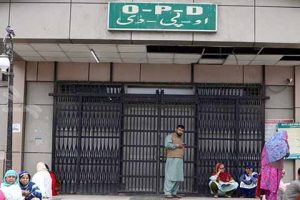 The state government on Wednesday decided to invoke Essential Services Maintenance Act (ESMA) to deal with the striking resident doctors of Government Medical College (GMC) Srinagar associated hospitals. The indefinite strike called by the doctors with respect to removal of pay anomaly has severely affected patient care in hospitals.

On the 2nd day of the indefinite strike, the government issued an order deciding to invoke ESMA. â€œIn view of the prevailing circumstances in the Valley, flood alert sounded by government due to weather conditions, the government has decided to invoke ESMA to deal with the strike by the doctors in various health institutions of the state,â€ the order reads.

It further states that the decision to invoke ESMA was taken as the government could not allow hapless patients to suffer and disrupt health services.

The government has terminated 35 registrars/demonstrators who had been served notice to resume services immediately. The total number of doctors terminated during the past two days has now reached 61. Besides that, non-PSC registrars and students were also placed under suspension since they were striking.

The principal of Government Medical College, Prof Samia Rashid , said that although the matter for which doctors have gone on strike was under consideration, patients could not be allowed to be taken hostage by anyone. â€œWe told them (doctors) that their issues would be sorted out soon but this (strike) is unacceptable,â€ she said. She added that healthcare could not be made a casualty.

A GMC official said that an advertisement for walk-in interview for residents was being floated. Meanwhile, patient care at all six hospitals of the medical college, took a hit as only a small number of doctors were available to attend to the patients. Resident doctors, who form the bulk of the workforce in hospitals, continues to remain off duty. At Lal Ded Hospital, the gates of both OPD block and casualty block were closed for patients. No regular maternity services were available and distraught women, some of them in advanced stages of pregnancy, were craving for attention.

Earlier in the day, the death of a baby triggered protests at the hospital. Although hospital administration claimed that the baby died due to complications, patients alleged that it was due to a shortage of doctors that the woman suffered complications. Medical superintendent LD Hospital, Dr Shabir Sidiq, said that due to the strike, all patient services, except emergencies, were shut. â€œWe are diverting patients to other hospitals and only emergency cases are being accepted here,â€ he said.

At other hospitals too, patients are facing a harrowing time as routine procedures, dated surgeries, investigations were cancelled. Doctors at SMHS Hospital said that only emergency cases were being accepted at the hospital.

According to the Resident Doctors Association (RDA), the strike would continue irrespective of ESMA. In a letter to the principal of GMC, the RDA stated that â€œwe have already submitted our resignation and would continue to be on strike till pay anomaly is removed and all termination orders are revoked.â€

Later in the day, an RDA spokesperson said that from Thursday, the striking doctors would provide all OPD services under various specialties in the lawns of the GMC. â€œWe will erect stalls and see patients in the lawns. The emergency cases must be seen by consultants and faculty ar the hospital,â€ the spokesperson said.