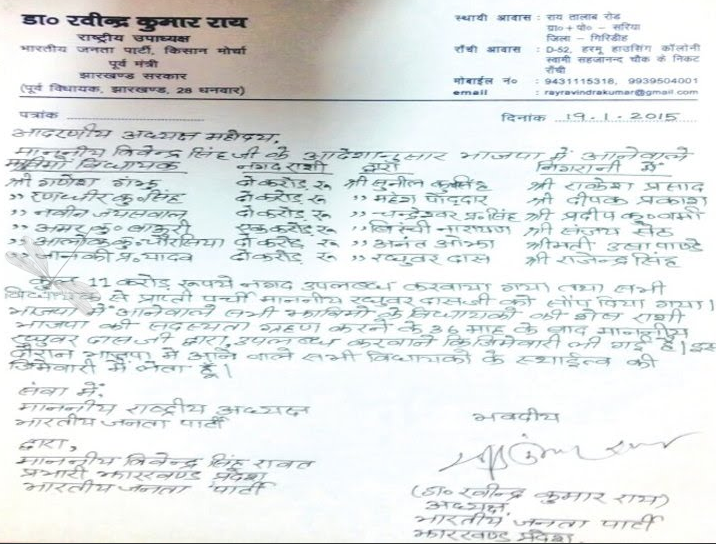 Fresh details regarding the state assembly elections of 2014 have emerged showing that the Bharatiya Janata Party (BJP) ‘bought’ MLAs of Jharkhand Vikas Morcha – Prajatantrik (JVM-P) by paying them crores. On July 6, 2018, JVM-P chief Babulal Marandi, released a letter written by then BJP President of Jharkhand, Ravindra Rai to the BJP National President Amit Shah where listed the names of the MLAs who were ‘bought’ and the amount paid to them. Following the release of the letter, Marandi has demanded a CBI probe into the matter while the BJP has threatened to file a defamation suit against Marandi.

The elections took place in December 2014 when the tenure of the state legislative assembly was up. Since the BJP won 37 seats and lacked a clear majority, they could not form the government. However, in February 2015, 6 opposition MLAs joined the BJP making their total number of seats to 43. Coupled with their pre-poll alliance with All Jharkhand Students’ Union (AJSU), the BJP got five more seats and hence could form a government of 48 seats in the 82-member House.

This was remarkable since it was the first instance after the creation of the state of Jharkhand in 2001,that the BJP had gotten a majority to form the government. Now, the BJP stands accused of bribing six opposition MLAs to join the BJP.

The letter produced byÂ Babu Lal Marandi states that a sum of 11 crores was paid to the JVM-P MLAsÂ Ganesh Ganjhu, Randhir Kumar Singh, Naveen Jaiswal, Amar Kumar Bauri, Alok Kumar Chaurasia and Janki Prasad Yadav by CM Raghubar Das. These were the same MLAs who had defected to the BJP in February.

The letter then says that the remaining amount would be paid by the Chief Minister Raghubar Das after they become BJP members.

This is also not the first time that such unconstitutional practices by the BJP are being exposed.

In the Karnataka assembly elections of May 2018, BJP had exhibited ‘MLA poaching’ skills so much so that it forced Congress to shift their MLAs to hotels and even to other states. In the elections, though BJP had emerged as the single largest party, the Congress alliance with JD(S) gave them the majority required to form a government.

Back then, calls leaked by the Congress showed the BJP bribing the MLAs with money and ministerial posts.Â Furthermore, the final decision regarding the elections had to be taken to Supreme Court of India on an emergency basis because pro-BJP governor had invited the BJP to form the government.

Even before their stunt in Karnataka, in March 2017, in the assembly elections held in Manipur, BJP followed a similar method.Â After winning 21 seats and coming second to the Congress, MLAs from the Congress were poached by the BJP one by one. Perhaps for the first time in the history of India, a Congress MLA joined the BJP even before resigning from Congress during the time.

India which prides itself as the largest democracy in the world, has laws that prevent such malpractices in elections. The Tenth Schedule of the Constitution is called the â€˜Anti-Defection Lawâ€™ where defection is the crossing of the floor by a member of a legislature, abandoning a position or association, often to join an opposing group. The law was put in place to combat defection since, â€˜it is likely to undermine the very foundations of our democracy and the principles which sustain it.â€˜