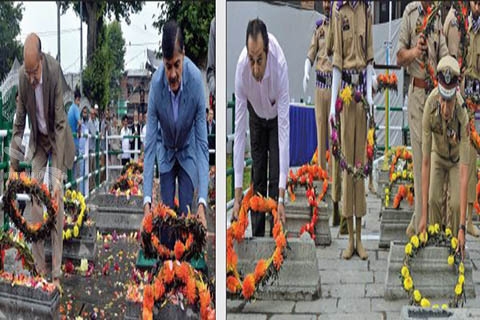 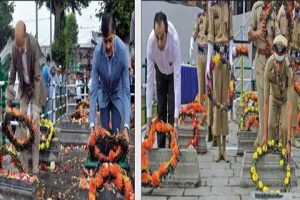 On the occasion of Martyrs’ day, a number of top government functionaries and politicians paid homage to the martyrs at the old grave yard Mazar-e-Shudha, at Khawaja Bazar (Srinagar) on Friday.

Except for the Governor, top government officers including the advisor to the Governor, K Vijay Kumar, offered floral tributes to the martyrs. Chief Secretary, B V R Subrahmanyam, director general of police S P Vaid, divisional commission Kashmir Bashir Ahmad Khan, IGP Kashmir, S P Pani, deputy commissioner Srinagar Abid Rasheed Shah and other senior officers were also present on the occasion. Meanwhile, the BJP and the Panthers Party skipped the official function as they did not believe in the event.Â  The BJP in particular, said that calling those killed on this day as martyrs is a debatable issue.

However, former chief minister Omar Abdullah expressed anguish over Governor N.N Vohra skipping the event. Talking to media persons, he said that â€œIt isnâ€™t a function of some party but a State function. It should be honoured likewise,â€ Omar also warned the government saying, â€œIf the government wants to end the tradition of commemorating the martyrs, then let them try it.”

A complete shutdown was observed across Kashmir on Friday to commemorate martyrs’ day while separatist leaders were barred from offering tributes to the martyrs.The main city was put under restrictions in order to foil a march that had been called by the Joint Resistance Leadership comprising Syed Ali Geelani, Mirwaiz Umar Farooq and Yasin Malik. Geelani and Mirwaiz were not allowed to move of their homes while Yasin Malik continues to remain in police custody.

In a statement, Mirwaiz Umar Farooq expressed anguish over the curb imposed on Kashmiris even on the eve of martyrsâ€™ day which is officially recognized by the state. He said, â€œThis proves that Kashmir is suffering foreign rule and genuine voices are muzzled to perpetuate the illegal hold over Kashmir.â€

It was on July 13, 1931 that 22 Kashmiris were killed by Dogra forces outside Central Jail in Srinagar as they had revolted against the then Dogra ruler Maharaja Hari Singh. Interestingly, only Kashmiris buried at Khawaja Bazar graveyard are officially recognised as martyrs and the day is not just an official holiday but also a day which sees ceremonial tributes paid to the martyrs with full State honours.

Swaraj to Embark on Four-nation Visit on June 17