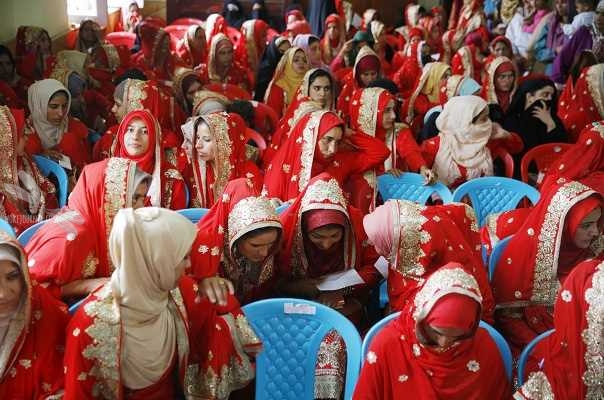 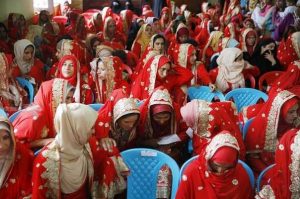 On Sunday, a mass marriage ceremony was held in Srinagar for the first time where 105 couples from various districts of the valley assembled at Amar Singh Club Srinagar and tied the knot.

The General Secretary of the Jaffri council, Ghulam Rasool, who conducted the event, said that â€œWe started conducting a survey of the couples across various districts in March 2014 and from the survey we found that thousands of women between 25 to 35 years of age in Kashmir were waiting to get married. â€œThe couples either belonged to very poor families or were orphans who were not able to get married,â€ Rasool said. Though they started out on a small number of couples, this year, the Jaffri council has hit a whopping 105 making it the first mass marriage ceremony. He also said that this time, though they had conducted the marriage of 105 couples, they had received requests from over 150 couples who wanted to get married through them.

Syed Afroza, one of the newly-weds, said that such marriages reduced unnecessary formalities and enabled the poor. Afroza said that her family was incapable of getting her married until this event took place. â€œBeing Muslims, we need to follow the principles of Islam which also forbid the unnecessary things that are prominent in marriage culture in every society,” she added.

As per the survey, there are around 35000 girls who are waiting to get married in the district of Srinagar alone, These girls are unable to fulfill the demands of their grooms and according to Afroza, simple marriages are the only solution to keeping the dowry system in check. Mehraj Ali, one of the grooms said that he was very happy with the event and that such initiatives were useful for the poor.Â He also said that such marriages reduce unnecessary formalities like dowry, grand reception and exchange of gold ornaments.