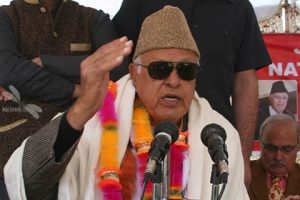 Former Jammu and Kashmir Chief Minister Farooq Abdullah on Thursday alleged that attempts were being made to change the secular fabric of India. â€œThe communal tension is growing across country. Muslims are being killed either in the name of cow or love jihad. There are some persons who act like mad dogs and think they are all powerful. This is not the India we believe inâ€.

Abdullah was visiting Saifullahâ€™s family to convey his condolences for the death of his brother Ghulam Mohiuddin Mir who passed awayÂ last Saturday. He also said that the need of the hour is to unite and strengthen the country. He said Muslims, Sikhs, Hindus and Christians have an equal right to live in India and “they will have to work together for the country.” “After coming into power, the main aim of the BJP is to change the secular character of India. We should be cautious and unite to defeat such forces,â€ said Abdullah who was accompanied by partyâ€™s vice-president and his son Omar Abdullah.

Meanwhile the National Conference leader also expressed concern over the worsening situation in the state saying there were forces working against peace in the state of Jammu and Kashmir. â€œThese forces don’t want peace and friendship between India and Pakistan. When the two countries are at loggerheads, the people in J&K are the most affected. We are going through a tough phase and we are becoming the victims of such hostilities,â€ said Abdullah, the MP from Srinagar.

He also expressed deep concern over the death of slain journalist and editor-in-chief of Rising Kashmir Shujaat Bukhari. Abdullah claimed that he (Bukhari) was one of the peace lovers in Kashmir and he tried his best to create friendship between India and Pakistan.