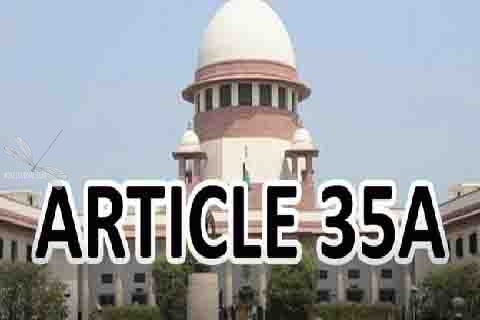 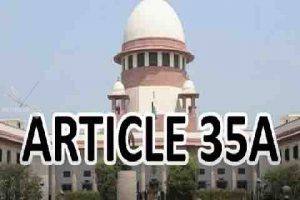 The Kashmir High Court Bar Association has pleaded that only President of India is competent enough to apply Constitution of India with â€œmodificationsâ€ and â€œexceptionsâ€ to Jammu and Kashmir.Â The Bar Association submitted in its intervention application that unlike other states, any amendment carried out by the Indian Parliament to the Constitution of India does not apply to the state of Jammu and Kashmir.

The High Court Bar Association Kashmir (HCBAK) filed an application in the Supreme Court seeking directions for participating as â€œintervenersâ€ in the proceedings of the case about Article 35 and assist the court in arriving at a conclusion.Â Earlier, five petitions were filed in the Supreme Court againstÂ Article 35 A, with the lead case filed in 2014 by a little known Delhi-based NGO, â€˜We The Citizensâ€™.

The Bar also said that the Government of India Act, 1935 was not applicable to the State of Jammu and Kashmir and the State under the said Act would never become part of British India.Â The conditions that were promised during the time of accession provided under Section 5 and 6 of the said Act were never fulfilled.

Besides that, the 26th Constitutional Amendment carried out in the Constitution of India with regard to Article 366 (22) is not applicable to the State of Jammu and Kashmir. Any change made in the said provision is inconsequential.
Relying on historical facts, the Bar pleaded that Jammu and Kashmir was declared as an independent sovereign territory under the Treaty of Lahore dated 09.03.1846 followed by the Treaty of Amritsar dated 16.03.1846.

The Bar further submitted that even after the passing of the Independence Act, 1947, Kashmir continued to remain independent country as it did not accede to any one of the two dominions and desired to execute a Standstill agreement with both India and Pakistan, which Pakistan accepted and India rejected.

This position continued till October 26, 1947, when the instrument of accession was signed conditionally by the ruler of Jammu and Kashmir. After that, the state was granted its own constitution. The Bar further pleaded that the â€œInstrument of Accessionâ€ became subject matter of serious controversy between the dominions of India and Pakistan in 1947 resulting in a fierce battle in the state during the said period.Â Â After the war, the Indian government
approached the United Nations Organization and the Security Council regarding the state and several resolutions were passed by UNO, which were rejected by India or either Pakistan.

The Bar pleaded that, between 1947-1950, the Union of India was making its Constitution after having become an independent country. In view of uncertain, peculiar position of the State (J&K) and the limited nature of accession, ground position and United Nations resolutions, special provision was incorporated in the Constitution of India empowering the President of India to make Constitution for the State.

Co-Working Spaces That Aspire to be Women-Friendly