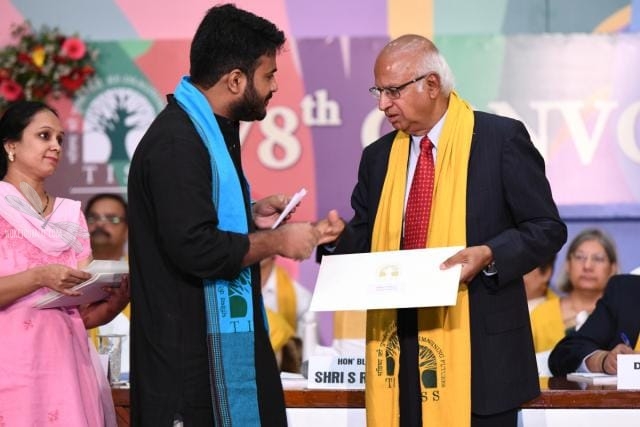 Tata Institute of Social Sciences (TISS), Mumbai denied registration in the Ph.D. programme to student Fahad Ahmad for declining to receive his M.Phil Degree from Chairperson S. Ramdorai during the convocation ceremony. The order dated July 25 2018, describes Fahad’s action as an ‘insult’ to TISS and coupled it with his involvement in the protest against TISSÂ administration that started in February this year.

on February 21, 2018, students at the four campuses of TISS, stalled academic work and protested against the administrationâ€™s decision to withdraw a fee waiver offered to students from SC/ST/OBC/NT-DNT (Scheduled Caste/Scheduled Tribe/Other Backward Class/ Nomadic Tribes â€“ Denotified Nomadic Tribes) categories who are eligible for the Government of India Post-Matric Scholarship (GoI-PMS).Following this, in May, TISS took disciplinary action against more than 25 students who took part in the protest. Later, the institute refused to sign Junior Research Scholarship (JRF) forms of the same students.

Fahad Ahmad, who is currently the only student who remains in TISS from the students who were part of the strike, has now been accused of bringing ‘disrepute’ to the various officers of the Institute and to the established name of the Institute because of his decision to decline accepting the degree certificate. The order from TISS administration signed by acting registrar M. P. Balamurugan and approved by the acting Director says that Fahad Ahmad failed in the category called ‘maintenance of discipline’. “Between February 20, 2018, till March 28, 2018, you have been involved in protest against the Institute during which you engaged in various disruptive activities…” the order adds.

Among the 25 students who were sent show cause notices for participating in the strike, Fahad is the only student from the Integrated MPhil. course who was denied admission in PhD. programme. Speaking to TWJ, Fahad who was the general secretary of the union said, “I refused to take the degree because I was trying to give a request letter to S. Ramdorai. I just asked him to address the issues for which we are protesting for so many days.”

Students had never gotten an opportunity to meet Ramdorai, the Chairperson of the Governing Board.Â In the video of the incident, Fahad is seen extending a white paper to Ramdorai. Despite repeated attempts, Ramdorai refused to accept the representation from Fahad.

“They are saying this is disrespectful. Then what about the disrespect they are showing to the marginalised students?” Fahad asked. He said that his representation asked an important question of why the Tata trust that gave more than 200 crore rupees to Oxford University could not give 2 or 3 crores required for the financial aid to marginalised students.

TISS is Asiaâ€™s first graduate school of social work and Ramdorai took charge as the Chairperson of the Institute in 2016. In an interview with Frontline, he had ironically said that “inclusion of all kinds is what the TISS is trying to inculcate in its graduates. Itâ€™s social inclusion, financial inclusion and opportunity for all so that nobody is left behind.”

Fahad said that the Institute was also targeting his Muslim identity by sending videos of the speeches he made during the protest to UGC to show that he was abusing Prime Minister Narendra Modi. The student who was admitted in the Integrated MPhil programme in 2016 had completed all the requisite formalities for his MPhil. His MPhilÂ thesis was on the ‘Muzzaffarnagar Riot’ of 2013.

Students’ Union President Jit Hazarika told TWJ that in the three years of his stay in TISS, such an action was never taken against any student for indiscipline. He also said that the Union intended to take up this matter and hold talks with authorities this week.

Fahad also said that it was from the batch that started the protest that the Institute made it compulsory that a scanned copy of their degree certificate from MPhil course was to be provided for Ph.D. admission. There are some students belonging to marginalised sections who were not conferred degree this year because they had not paid the fee. These students were presented with a token certificate during the convocation ceremony. Even though Fahad’s degree certificate is with the Institute itself, they are refusing to give its scanned copy. TISS authorities were not reachable for comments regarding the matter.

TISS Is Now Denying Fellowship To Students Who Participated in Protests