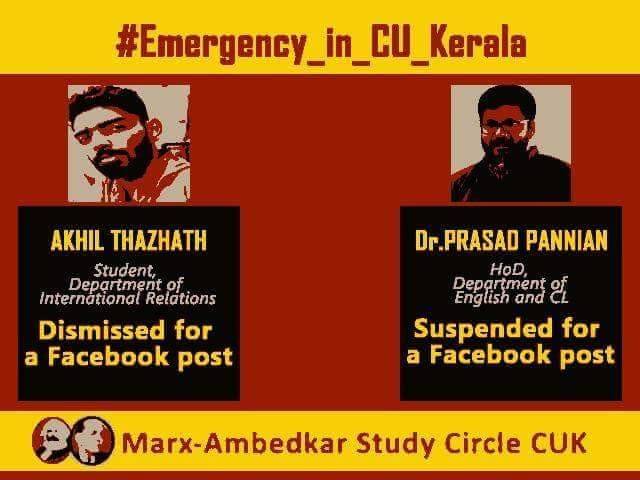 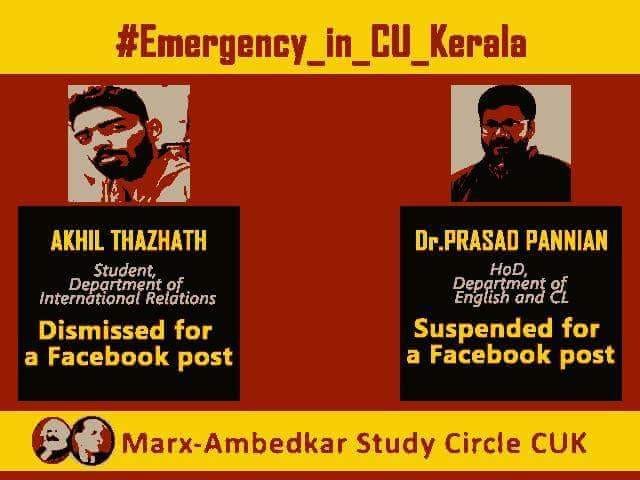 The Central University of Kerala administration infamous for its anti-student actions dismissed a student on Friday for his Facebook post accusing that it targeted the CUK authorities. Akhil’s dismissal came on the same day when a suspension order was also given to Prof. Prasad Pannian, HoD of English and Comparative Literature department.

Responding to the issue, Akhil wrote on his Facebook wall, “The University administration has committed a more violent and vengeful act than my dismissal. All of this points to the fact that we are facing a bunch of criminals protecting the status quo. Being unable to do the necessary, I want to say that I am also responsible for creating this status quo. With more love and comradeship, I want to continue my life through my struggles. I want to despise those who think that they have taught me a lesson. They are the real victims of history. Not me.”

The university administration was widely criticised for their recent actions wherein they had dismissed a student and suspended a Professor. Responding to the issue, Sonu S, a student of CUK said, “The accusation against Akhil was that he used derogatory language against the Vice-Chancellor in a Facebook post. However, he has said that it was a fictional post which did not mention any names. Actions are always taken against students who oppose the admin. They are trying to cut down the voices of dissent.” Talking to The Woke Journal, Akhil said, “I want to find a resolution for this within the university through protests. If not, I might approach the court.”

Political parties within the campus have strongly condemned and protested the decision of the admin. ASA condemned the incident and asked the student community to extend their solidarity to Akhil. “Akhil Thazhath was an active member in CUK student agitations. The student community believes that this was the main reason for his dismissal. This is not the first time the administration is using their powers to curb students’ right to protest,” the statement read.

In a statement, SFI-CUK unit responded, “CUK administration is continuing their policy of revengeful targeting against the students. We condemn this decision which aims to inculcate fear among students and thrashed the academic career of Akhil Thazheth.”

Earlier in June, 5 students were dismissed alleging misconduct from the University hostel. On August, a Dalit activist and Ph.D. scholar G. Nagaraju was arrested from the university premises for breaking a glass pane.

Vibgyor Group of Schools Delivers a 100 Percent in IGCSE Results