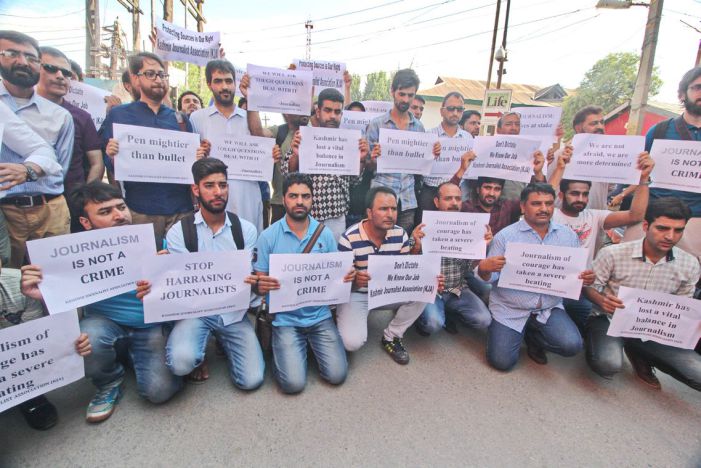 On Monday, Journalist bodies of the Kashmir valley gathered at the Press Enclave in mark to protest against the incarceration of their colleague, Asif Sultan, who has been sent by the court to 15 days’ judicial custody in Central Jail Srinagar over a militancy related case.

Meanwhile, Asif Sultan’s arrest has been challenged in J&K High Court, and the court Monday issued the notice to the state government and fixed September13 for the hearing of the matter.

The protesting journalists demanded the immediate release of Asif Sultan, assistant editor at Kashmir Narrator magazine. The KJA said that Asif’s arrest was aimed at intimidating journalists in Kashmir, who are already working under tremendous pressure.

The journalists appealed to Governor Satya Pal Malik and Director General of Police Dilbagh Singh to intervene in the matter and order a high-level probe into the illegal detention of Asif at Batamloo police station for six days.

“Asif was detained illegally for six days without any charges against him. We demand that the officers concerned be held responsible and action is taken against them for arresting a journalist,” the KJA said.

According to family members of Asif and the editor of Kashmir Narrator, the police case was filed against Asif after an argument with the top police official. However, police refuted the charges and stated that “In his magazine, Kashmir Narrator, he would often give coverage to Hizbul Mujahideen terrorists, especially Burhan Wani, to attract youth towards terrorist organisations, especially Hizbul Mujahideen.”

Meanwhile, Asif’s last big report was on slain Hizb militant Burhan Wani and it was published on Burhan’s second death anniversary this year on July 08.

The journalist bodies appealed to the International Journalist associations and Human Rights forums to take up the issue strongly and protect the freedom of expression, which is granted by the Constitution of India. Besides that, they also appealed to the Press Council of India to push for the immediate release of Asif.

According to them, Asif was detained on a journalistic piece about the top Hizbul Mujahideen commander, Burhan Wani, which is totally uncalled for and against ethics. The protesting journalists said that the rights of journalists were being violated in Kashmir.

Asif was picked up two weeks ago from his residence in Batamaloo area of Srinagar. While he was detained for a week at Batamaloo police station, he was formally arrested on September 1, allegedly for “harbouring” militants.