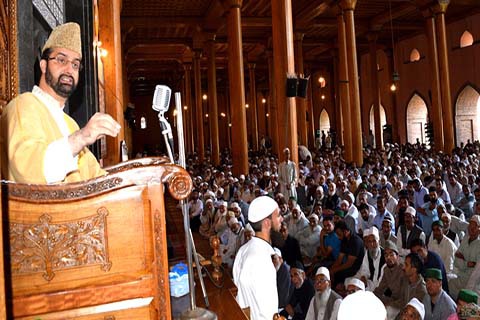 Ahead of Panchayat and municipal polls in Kashmir, the Hurriyat decided to launch a social media campaign for the boycotting elections and demanding the right to self-determination, which was promised by the first prime of India Jawaharlal Nehru.

On Friday prayer, Chairman Hurriyat Conference (M) Mirwaiz Umar Farooq said that the people of Kashmir were not interested in any election and the Joint Resistance Leadership would soon start a sustained election boycott campaign on social media with only one key slogan ‘no election, only right to self-determination’.

Mirwaiz, who is the head Imam of the historic Jamia Masjid Srinagar said that time has come when New Delhi must understand that it cannot make the people fool through cheap slogans like sadak, bijli, pani (roads, electricity, and water) as Kashmiris were not interested in any polls either it is local bodies, panchayat, assembly or parliament.

“All elections announced for J&K are nothing but a farce, aimed at diluting the basic nature of Kashmir dispute. The people of Kashmir and the leadership have already rejected these polls,” said Mirwaiz.

Mirwaiz said rather than curtailing the number of forces, more and more soldiers were being sent to Kashmir to muzzle the voices of people with military might. The using of military power would annoy Kashmiris unless and until New Delhi announces measures to resolve Kashmir issue peace won’t prevail,” he said.

In order to attain peace, India should start negotiations with the neighbouring country and start demilitarization, repealing black laws like AFSPA, PSA, DAA, dismantling of watchtowers and removal of bunkers from civilian areas,” he said.

Meanwhile, Mirwaiz welcomed United Nations Human Rights Council chief Michelle Bachelet’s statement that there was no action by New Delhi on the UNHRC report depicting grave rights situation in Kashmir, Mirwaiz said it has been a long pending demand of the people of Kashmir that the world forums must wake up to take notice of serious human rights situation in Kashmir.

Mirwaiz expressed his gratitude over the remarks of the newly-elected UNHRC chief on J&K supporting the right of self-determination of the people of the state. “By outrightly rejecting the reports of UNHRC and that of Amnesty International and OIC on Kashmir, Delhi stands exposed and its claim of upholding human rights and values also stand punctured,” he said.

“It seems the Government of India is not learning any lessons from its mistakes committed since 1947 and continues to remain in a denial mode. This way it is wasting its time, energy and resources.”

Mirwaiz said the world has started to acknowledge the fact that it is the fourth generation of Kashmiris that is demanding their birthright on the streets. After Friday prayers, a peaceful rally was organized by Hurriyat (M) outside the Jamia Masjid to protest the killings of political workers, Hurriyat activists and the youth by unidentified gunmen.  The protesters carrying placards were demanding an end to these ‘targeted killings’.