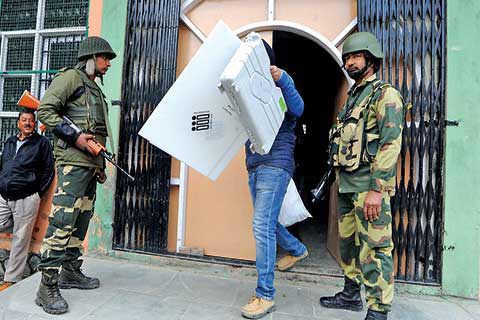 In order to make conducive civic polls, the government of India will now deploy 40000 additional paramilitary soldiers during the urban local bodies’ elections, which is a record in comparison to the 2011 polls

Of the 40,000 soldiers, 20,300 personnel have been camping in Kashmir since last week of May when they arrived as Amarnath yatra security. The rest are on their way to the state. They would now be accommodated in about 300 hotels in Srinagar, said chief secretary BVR Subramanyam. CRPF spokesman Sanjay Sharma also said that the additional 40,000 soldiers would be primarily deployed for “area domination”, night patrolling and security for contestants if needed”.

Already, as many as 50 battalions (each battalion is 1134 personnel) of CRPF personnel’s are stationed in Kashmir region alone (60 in the state) for counterinsurgency operations and law and order maintenance. The total number of CRPF battalions in India alone is 239.

A police officer said that the army would be requested in case of emergencies. Security experts claim that there is a need for such a huge number of additional forces since there are threats from militants and boycott calls from the resistance leadership. .

Meanwhile, Hizbul Mujahideen outfit has already warned those contesting upcoming polls to “get ready for acid attack”.“This is not for the first time additional troops have been sought for polls. Additional forces were called during the 1996 and the 2008 assembly polls that took place after the unrest,” said additional director general of police law and order Munir Khan. In contrast, former director general of police Kuldeep Khoda said that no additional troops were sought from the Centre during 2011 panchayat elections.

Munir Khan however reiterated that multiple factors were responsible for the call for additional forces. “We have decided to go for foolproof area dominations and for that, we need extra forces,” he said.

A source in the police said that the request for additional forces was sent to Union home ministry after the majority of district police chiefs cited law and order issues and militancy unrest as major challenges. He also said that the security cover for the upcoming civic polls is nearly similar to that of the 2014 assembly polls when 50000 additional forces were brought in.

The ULB polls, to be held in four phases, will start from October 8 while the panchayat polls would be conducted in nine phases from November 9.

Over 100 PML-N Workers Detained in Lahore