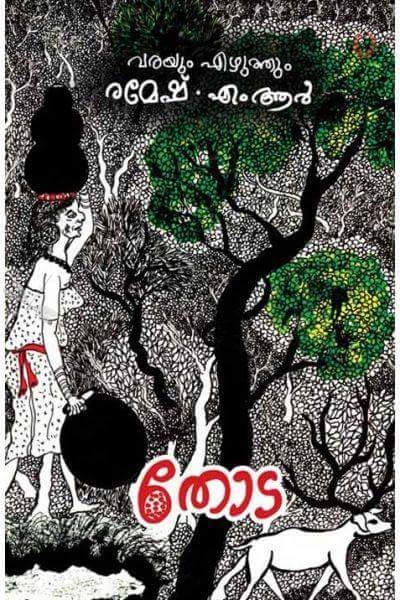 It was in 2012 that Remesh MR had broken into the writing scene with his ‘Thoda’ published by Olive Publications. An artist hailing from the Mullukkuruma community, Remesh draws a portrait of his hometown, its rich culture and customs through words and art in his book. The Woke Journal caught up with him recently to have a conversation on his book and his community.

Could you talk a bit about yourself?

My house is near Kalpetta in Wayanad. I hail from the tribal community of Mullukkuruma. After completing pre degree, I stopped formal school education. From then on, I turned to painting. I learned art from Kozhikkode SK Pottekad art centre and From Mananthavady.

Could you talk more about ‘Thoda’? What is thoda?

The people who reside next to my hometown are those who hail from the Kattunayka and Paniya community. I also hail from one such community. Since my childhood, I have spent time with them. This book is a result of that 35 years experience I had shared with them. In this book, I have spoken about their customs and beliefs from birth to death. ‘Thoda’ in particular, refers to the ornament worn in the ear, (a sort of ear ring) by the Paniya community.

How long did you take to finish the work?

I took around two years to finish the book. Initially, Mathrubhumi was supposed to publish the book but later on Olive Publications took it up. The writing bit wasn’t that difficult since I knew how to go about it.

What about the paintings in the book?

What were the challenges that you faced while working on this book?

The place we live in, is quite remote. I used to draw pictures, imitating those images that I found in children’s weeklies like  ‘Balarama’ and ‘Poombatta’ .Then, I started drawing for record books. I moved on to imitating the pictures of Hindu gods printed in Calendars. The turning point of my life came when I started drawing scenes from the movie ‘Passion of the Christ’, from my memory. All that I needed back then to sketch the images were a pen (5 rupees) and a chart paper (3 rupees). After some time, I began exhibiting at Kanakakkunnu palace in Thiruvananthapuram.

What inspired you to come up with this work?

My reading experience is very less. Though I couldn’t read a lot of books, I read whatever was available then. My style of writing is therefore, a ‘localized’ one. It’s written in plain language and anyone can understand it without much trouble. I just copied things as I saw it.

How far did your social context challenge you? Did you face any kind of discrimination during your attempt to publish this work?

I face a lot of rejections in my everyday life. Last year, I completed 30 paintings. But I couldn’t frame it. So when I approached the government for financial assistance, they said that funds would not be allotted for paintings. This is when they allocate a large amount for other creative attempts.
Despite this, I am determined to challenge all of the rejections that I face, through the works I create. I am often discriminated as a person hailing from a tribal community. I want to challenge this discrimination by doing better than others.

What or who inspired you to paint/write?

It was always the people around me. And my parents. None of them knew much about paintings. They looked at my work and always opined that they were good and encouraged me to do more. Their conception of a painting is limited to the copying of village scenery with some hills and rivers.

The number of writers who hail from a tribal/Adivasi community is very low, or most of them are not considered part of the mainstream. As someone who hails from such a background, how do you personally understand this situation?

People from such communities do not get enough opportunities. There isn’t anyone to nurture their artistic abilities. I could reach this stage only because I stayed in this field for over 15 years. There are a lot of talented people out  there. Even if it’s writing or paintings, people would appreciate it. That’s it. Considering our social and economical background, we won’t be able to pursue it any further than that. We would be forced to take up other works and earn for survival. It’s not the same for other communities. Take the case of the child artist Mani, who acted in the movie Photographer along with Mohanlal. He could do just that film despite having the talent to do more. If only he were from another community, this wouldn’t have happened. He would still be an actor, that too with star value. People often support you but somehow you won’t be able to take it forward. If someone achieves something in these circumstances, it is only because of their effort.

Did you face any rejections from any publisher before finally publishing the work?

No. Nothing of that sort happened. O K Johnny, associated with Mathrubhumi was keen about this work. After he quit Mathrubhumi, he contacted Arshad Bathery from Olive publications and got the work published. Yesterday, someone from America contacted me expressing their interest in translating this work into English.

How did people receive your work, especially the people around you?

They are aware of the fact that I have written about them. But they often ask me to not reveal their secrets.

Would you want yourself to be known as an artist or a writer?

More than writing, I prefer painting. That is my area. I draw themes from tribal background that no one has used before. I learned to paint using water color as medium but now I paint with acrylic and parker pens. I use a style of painting that incorporates both modern and realistic art.

About your future endeavors?

I have currently worked with three tribal communities in this book- the Kattunayka, Paniya and Mullukuruma. I would also like to do another work on communities such as Adiya and Oorali. But I do not have the financial back up for that. I have 30 paintings related to this. And for each painting, I would like to write two essays. My desire is to translate these works into English. But even when it comes to translations, financial constraints become an issue.

Who will cry when you die?: The Brutal Murder Of A Young Student Leader...