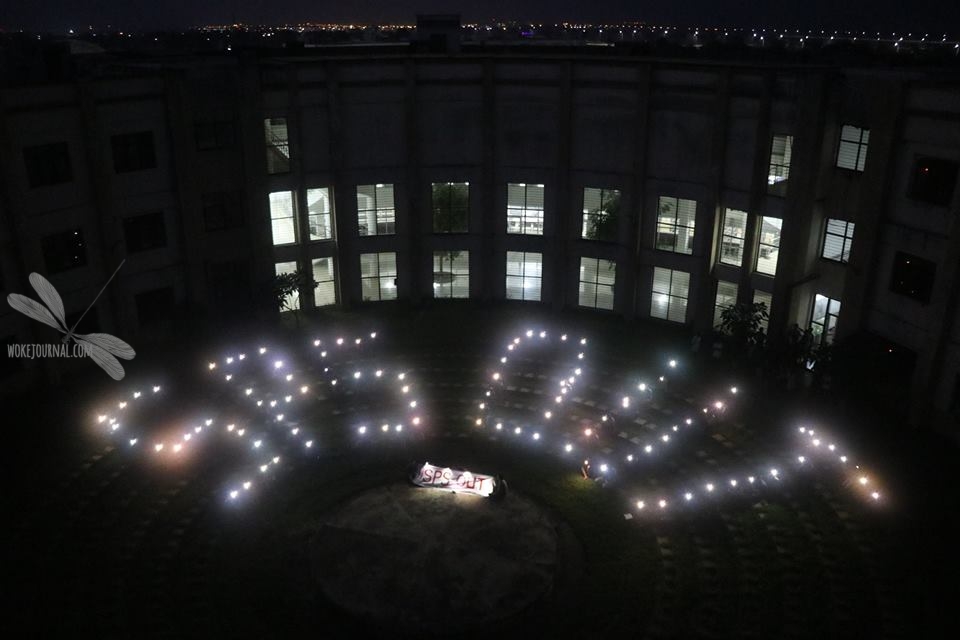 “As you just saw, the students have refused all your replies. This is a no-confidence motion from the entire student community which has been abetted by over 800 signatures. We have two demands. First, we need the audit report to be public and we cannot wait for a VC meeting for the same. The second and the most important thing is that the students of HNLU have lost confidence in its VC, Dr Suk Pal Singh. We demand through this resolution that you resign and vacate the office and other key administrative positions. These are our two demands.”

These were the opening sentences of one of the most creative student protests that the country witnessed in this year. These words were uttered by the student representative of Hidayatullah National Law University (HNLU) to Vice-Chancellor Dr Suk pal Singh in a meeting of no confidence against him.

The meeting followed with a “Not my VC” sloganeering from the crowd of protesting students.

Students of HNLU were protesting since 27th August night demanding the resignation of the VC. It was on the same day that the High Court of Chhattisgarh passed a judgement citing that Mr Pal Singh, who was the vice-chancellor had illegally extended his tenure by 5 years.

“There were two protests last month. In the name of Pinjrathod (break the locks), we started a protest on 27 August. On this day, the High Court of Chhattisgarh gave a judgement citing that Mr Palsingh, who was the vice-chancellor, had illegally extended his tenure by 5 years. The judgement removed him from the VC post. And that is when we decided that we would cite the judgement whenever he comes back and would ask him to resign and leave the campus,” says Akansh Jain, a student at the campus.

There were many reasons why the students demanded the removal of Palsingh. This includes corruption charges, the inaction of VC in keeping a check on sexual harassment complaints on campus, misbehaviour of hostel authorities towards female students, moral policing, denial of basic facilities – like research opportunities, funding for moot court, and quality of academics. Women students reported that they were harassed and stalked by senior faculty members.

Once, one of the women students was even asked to dance in front of the whole class by a faculty member. Irked by this, students started a google forum to openly report the harassment that they faced on campus.

“When you are alone no one can help you. We realised that we have to be organised. This is a law university wherein we talk about people’s rights. If we can’t defend our own rights, how can we preach about others?,” Akansh asks.

The students also started a hashtag campaign on twitter called #HNLUKiAzaadi. Each of the crucial moments during the course of protest was documented and sent out through various social media platforms including YouTube and Facebook which is when the protest started to gain momentum.

On the 3rd day of protest accepting the demand of students, the VC was ousted and the 14 demands put forth by the students were accepted.

However, the happiness for the students was short-lived as Sukh Pal Singh approached the Supreme Court and succeeded in getting a stay order which reinstated him as the VC. With this, the second series of protests began from September 25th.

The series of protest then became the no-confidence motion against the VC which was signed by 800 students.

“We were happier during the tenure of Mr Sharma (the interim VC) because he could do things in seven days which Mr Palsingh failed to do in seven years,” said the student representative in the no-confidence meeting.

Following this, the students issued an ultimatum to the VC and an indefinite strike was launched. Once the ultimatum ended, students issued him a no-recognition motion against him which said, “We won’t recognise you as the VC.“

On 29th, the fourth day of protests, the students finally got to opportunity to meet the chancellor of HNLU, the Chief Justice of Chhattisgarh High Court. “He patiently heard us and asked us for more time. But we were not in a position to give more time. This is when we decided to launch the hunger strike,” said a second-year law student of HNLU. More than 500 students joined the indefinite hunger strike.

Finally, the VC had no choice but to succumb to the demands of the students. On 3rd October, Pal Singh met Chancellor to submit his resignation and Justice CB Bajpayee was appointed as the new Vice-Chancellor.

On 7th of October, when the Chancellor visited the campus, he said, “I have not come to bury Caesar. Caesar had already been buried on the 3rd of October. But I have come to bury the past. It is my request to all the revolutionaries amongst the students, employees and faculty that they must return to the barracks. The revolution is over. The Czar is toppled.”

The Chancellor also promised the students that from now, things will always work in the best interest of students.