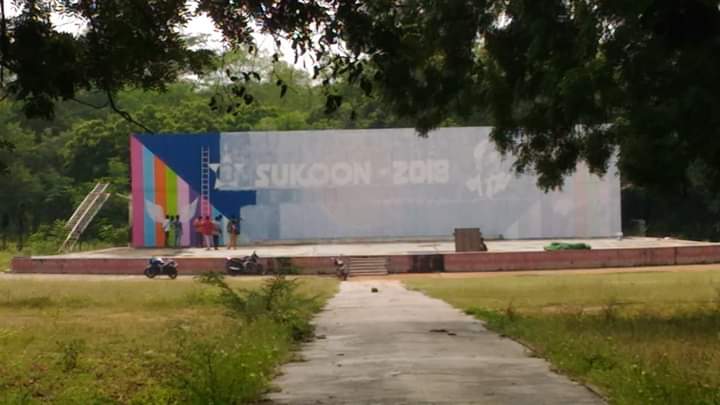 After being elected as student union in the University of Hyderabad, Akhila Bharatiya Vidya Parishad (ABVP) painted over the portraits of Dr B R Ambedkar and Rohith Vemula, where the annual University carnival Sukoon is held.

This was done during the day of the 17th of October when the ABVP led alliance assumed office in the presence of chief guest Chancellor- Justice L Narasimha Reddy and guest of honour, Sunil Ambekar.

“Today we see the assuming of office by ABVP led alliance where the Chief Guest is the one who acquitted all the convicts of Tsundur massacre, where eight Dalits were massacred. All the fifty-six culprits were released and pronounced innocent by the atrocious judgment by the High court bench headed by him who operate based on the laws of Manu. To welcome him and enjoy your capturing of power you have to erase our struggle from the backdrop. You cannot do it. That frustration might be the cause which made you make Ambedkar and Rohith invisible in the open dais.”

The statement also questioned and criticised Other Backward Castes Federation(OBCF), and Sevalal Vidhyarthi Dal (SLVD) for the alliance they forged with ABVP.

“Every time, only during ‘Sukoon’ time, the stage is used. But now they want to do an open dais thing and make a huge event; to show their power. So they don’t want Ambedkar or Rohith Vemula on the open dais,” says Samson Gidla, President of Ambedkar Students’ Association.

The results of the student union election in the University of Hyderabad was declared on 6th October 2018 in which all the main panel positions were bagged by the ABVP-led alliance.