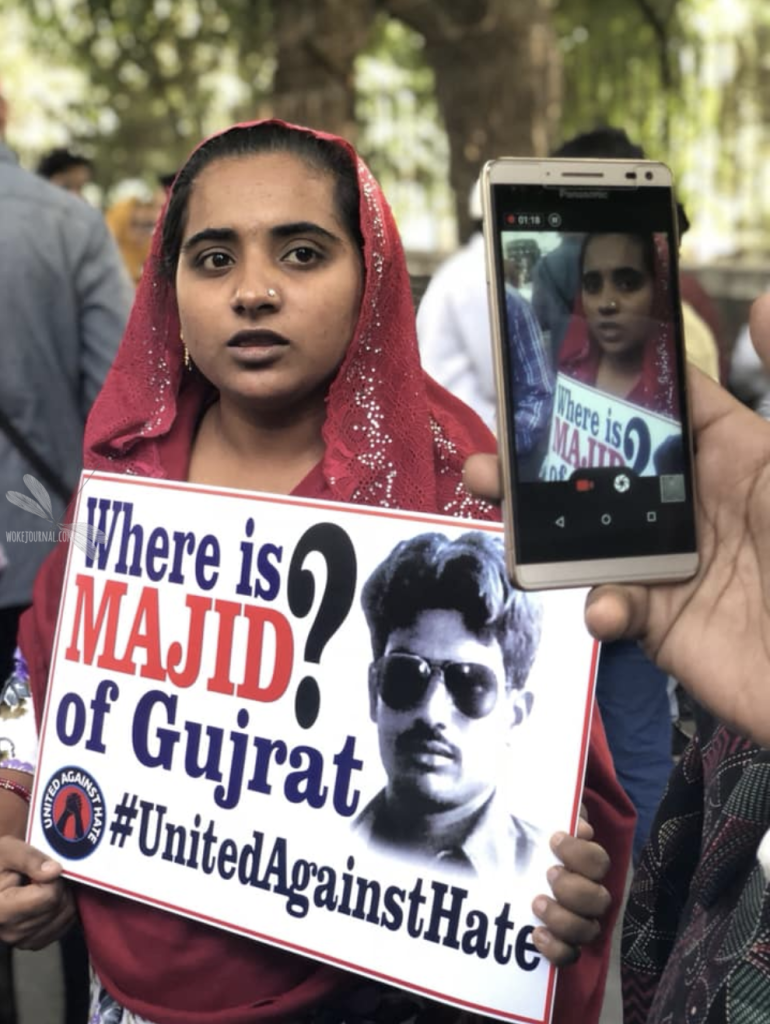 Ashiyana Theba (22) came to Delhi from a remote village in Kutch, Gujarat to attend a rally that was called to mark two years of the disappearance of JNU student Najeeb Ahmed. To Ashiyana, the pain that Najeeb’s mother Fatima Nafis feels isn’t alien. She has been fighting a similar battle to find her husband Majid Theba, who has gone missing since July this year.

“I have never come to Delhi or even Ahmedabad before,” Ashiyana told TWJ, “I was happy in my village in Kutch. I had married Majid last year and is now four months pregnant. Since his disappearance, I have been going from pillar to post to find him. Life has suddenly changed so much ever since.”

On July 19th, Ashiyana along with her husband Majid (27) and his younger brother Ghulam (25), were having dinner when the police landed up at their house. As soon as they identified Majid, they started beating him up. When Ashiyana tried to intervene, she was hit in the stomach.

The neighbours who gathered hearing the commotion urged the police to not hit Ashiyana who is pregnant. Majid insisted that Ashiyana be taken to the hospital immediately.

That was the last time Ashiyana saw her husband.

In the civil hospital of Bhuj, the doctors admitted Ashiyana who was complaining of pain in the stomach. At 2 am, however, a doctor came and informed her that she was being discharged and told her to leave. Outside, a police van was waiting for at the hospital gate. The police personnel insisted that she go to the police station. But Ashiyana did not feel safe as there were no lady constable present in the van. The police then asked her to come to the divisional, a police station of Kutch, on her own.

As she reached she had noticed even inside the police station, there were no female constables. Ashiyana told TWJ that the police abused and beat her inside the police station and also told her to ‘go find Majid if you can’.  She came back home trembling and exhausted but could not find Majeed. Ghulam, the younger brother of Majid, who is mentally challenged, had left the house by then to stay at a relative’s place. “The neighbours are all terrified and they are not telling anyone. I have not found Majeed ever since. I suspect the police has killed him”, Ashiyana said.

After two days, Ashiyana with the help of some local NGOs, tried to file a case with the police. “The evidence of the assault on me will be there in CCTV footage taken from the Police Station. But the police has refused to file any case. They have rather declared Majid ‘wanted’ in ten cases and is claiming that he is absconding,” she said. Ashiyana then filed a Habeas Corpus in the High Court. “We have found at least one photo which shows Majid being taken inside a police vehicle and we have submitted that to the court,” Ashiyana said.

The people in Kutch, Gujarat since 1985 have witnessed such incidents under successive governments. Police have picked up Muslim men randomly and they have never returned. Mohsin Attar (46), an NGO activist from Bhuj, told TWJ that there had been nine such cases of disappearance of Muslim men from Kutch since 1985. “Kutch is known to the world for tourism and Runn of Kutch festival. The PM attend Kutch festival and praises its beauty and people. He, however, never talks about the abject poverty that people of Kutch are subject to. Nor is he bothered about the police brutality that we are forced to live with,” says Attar.

The local activists of Kutch and Ahmedabad wanted to hold a rally called ‘Majid Khoj Yatra’ (Rally in search of Majid), from Bhuj to Ahmedabad. But the police denied permission to hold the same. The organizers through Advocate Shamsahd Pathan filed a petition in the Ahmedabad High Court on August 22, to seek permission. The High Court, however, refused to give permission and referred it to the office of DGP to give a concrete decision. “Why is the administration denying us to hold a peaceful and democratic rally?,” asks Mohsin.

However, the family of Majid, especially Ashiyana, is not planning to give up so easily.

Meeting Najeeb Ahmed’s mother, who is missing her son from JNU for two years now and others who face similar ordeals have given more strength to Ashiyana. “These women have not given up and they are fighting for justice. I will also not give up now. The PM talks about Gujarat Model of Development everywhere. He (Narendra Modi) is a shameless man. His Gujarat model is made up of blood and tears of poor people.”

Summer Vacation Extended in West Bengal due to Heat Wave