Donald Trump speaking to the Fox News has repeated his threat to declare a national emergency to acquire the requisite federal funds to build a border wall. The proposed wall to be built between US and Mexico body was a key promise in Trump’s election campaign. This comes just two days after a televised address to the nation to make his case for a wall and a day after he left a meeting with Democrats after they refused to pay for it. The disagreement between Donald Trump and Democrats have led to the second longest shutdown of the government in US history. 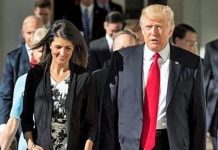