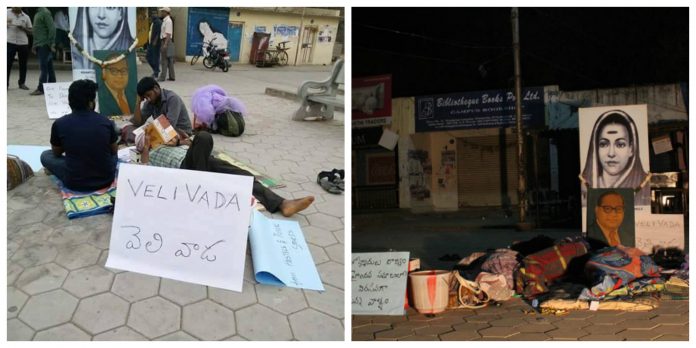 On Saturday 5th of January, a notice signed by Vice Chancellor Podile Appa Rao was pasted outside of the hostel doors of three students active in Ambedkar Students Association (ASA). Sreeja Vastavi, Munna Sannaki and Donta Prashant in Hyderabad Central University (HCU) were the students seemingly warned to remove the structure by the administration.

The next day, the administration dismantled the ‘Velivada’ (Dalit Ghetto), which was a structure at the North Shopping Complex on the campus. Velivada was raised by Rohit Vemula, with four of his friends who were suspended from hostel back in December 2015. The structure was removed early in the morning on Sunday, 6th January. The structure had in it the portraits of social revolutionaries like B.R Ambedkar, Ayyankali, Jyotirao Phule, Savithri Bai Phule, Periyar among others.

The spurious actions of the administration, two weeks prior to Rohit Shahadath Din (Martyr’s Day) has resulted in a massive outrage from the student community.

On the previous day on Friday 4th of January, ASA had replaced the portraits and flex boards as they had withered.

The notice pasted on the wall warned, “The University Administration has been issuing several circulars not to display any banners, posters, flexes etc on the campus without prior permission. However, it has come to the notice of the Administration about erected flexes and posters at the shopping complex (North) on the interim night of 4/5 January around 00.45 am, in spite of objection made by the Security personnel not to destroy the floor by digging the University property by erecting a temporary shed with banners, flexes etc.”

Speaking to TWJ, Donta Prashant said, “The University administration had given a notice stating that we had dug something in order to place Velivada over there. This is quite ironic as Velivada had been there for the past two years. So this is nothing but a lie. Three of us received a notice, in fact they just pasted the notice on our doors and the very same night they removed the structure. This has been done by the Vice Chancellor himself who is an accused in the SC/ST atrocities prevention of atrocities act in the institutional murder of Rohit Vemula and humiliation and harassment caused to five of us.”

There had been attempts from the administration to remove Rohith’s bust and Velivada even before, however the attempts remained unsuccessful due to protest from students.

He also referred the action to be a criminal offence as it counts under atrocity. “He is erasing Ambedkar’s images on the campus. The reason why we were socially boycotted was that we were reading and propagating Ambedkar. And the frames that were removed from Velivada, were all revered by the Dalit Bahujan masses of the country. This is clearly an atrocity. Yet if he is able to do it, it is only because of the constant support that he is enjoying from the MHRD and BJP government,” says Donta. He demanded that the VC shall step down from his position and shall be arrested by the police.

HCU responded to the controversy in a 4 point press note which was slammed by students. “A public university like the University of Hyderabad that is committed to upholding Constitutional principles, cannot be expected to condone or promote any permanent structure that, by name, seems to invoke a past symbol of caste discrimination,” read the statement.

“There was a particular context in which a temporary structure that protesting students had erected at the North Shopping Complex on the University campus three years ago. The University could not become a party to perpetuating caste hatred and caste discrimination of any kind by allowing the continuation of a physical symbol that recalled untouchability and ghetto living at a common campus space,” the statement continued.

The current action is described by the admin a part of their larger plan to remove all banners and flex boards from the campus. “It appears that the temporary structure at the North Shopping Complex had fallen apart under weather conditions over the last three years and a section of the students decided to defy the circular and attempted to resurrect it with fresh flex board material on Saturday. It is that new material, along with other banners hung at different locations by other sections of the University community that were removed by the university security. It is unfair to link this measure to any policies of the University towards SC/ST students,” the statement added.

Since last year, the administration had started painting and white washing political graffiti, portraits and quotes from the walls.

However students see this clearly as a move to undermine Rohit Shahadath Din and erase any memories related to Rohit Movement from the campus. Responding to the clarification ASA said, “The clarification note issued by the university speaks one thing very loudly- the guilty conscience of Podile Appa Rao and those of his henchmen. Velivada stands at the centre of formation of a community here in the university campus and elsewhere. It stands at the centre of the formation of bonds that are not inspired by hatred, but by love, affection and sympathy for fellow beings. Velivada is a site of education, empowerment.”

Though the police took a case on the students upon administration’s complaint, they are yet to respond regarding the case filed by students. The case that is filed against the student fall under IPC 427 of IPC which is mischief and thereby causing damage to the amount of 50 or upwards.

On the other hand police officials responded that, they would act up on the complaint of students only after verifying whether the structure was built with the permission of VC as he is the custodian of the university.

However, challenging the narrative of the administration, the students have made an open call requesting the student community, the faculty and non-teaching staff to visit ‘Shopping Complex’ to check if any digging or destruction has been made on the floor near Velivada.

Other than the ABVP and its allies, all the other student organisations convened together and decided to carry forward with protests under the banner of ‘Justice for Rohit Vemula’. Students marked their dissent starting from 6th January by burning the effigy of Podile Appa Rao. Next day, they marched to the administration building demanding clarification and explanation on the incident from the registrar. The space where Velivada stood was reclaimed by the students as they replaced it with smaller portraits of social revolutionaries. Meanwhile, a battalion of police and security staff prevented students entry to the ‘admin block’.

Addressing the police officials Donta Prasanth of ASA said, “We are not carrying any weapons with us. We are carrying with us the portraits of our social revolutionaries. Let him come down and explain why the university has taken down the portraits and dismantled Velivada.” He also reminded the administration what happened at Ramabai Ambedkar Nagar when Ambedkar’s statue was garlanded with chappals (sandals).

“Dalits have sacrificed their lives for the cause of self-respect. Appa Rao must remember the enormous amount of history that these communities have. If the admin is not reinstating these portraits, the things that could happen in the future cannot be estimated. Because each of this is connected with emotions. Because none of us would be here without Ambedkar,” he added.

Students are continuously meeting at the space, to keep the protest alive. They also categorically stated that the protest would continue until Velivada is reinstated and portraits replaced. 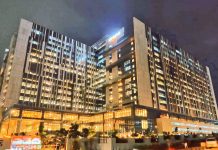 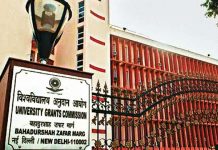 UGC to examine the issues of two degrees at a time