On Wednesday, the 2009 IAS batch topper, Shah Faesal resigned from service as a mark of protest against the civilian killings in Kashmir. Faesal is the first IAS officer in Kashmir who took such a step against the civilian killings. Citing unabated killings in the valley and the lack of any sincere outreach from New Delhi, Shah Faesal said that he was forced to resign from bureaucracy.

Meanwhile, there are also rumours that Faesal is going to join politics and would contest the assembly elections on the mandate of the National Conference (NC) for the Baramulla-Kupwara parliamentary segment. Faesal returned to the state from the US on January 2nd and applied for voluntary retirement from IAS on Monday. On Twitter, Shah Faesal wrote that in order “to protest the unabated killings in Kashmir and absence of any credible political initiative from the union government, I have decided to resign from IAS. Kashmiri lives matter.” Besides Twitter, Faesal also posted on Facebook. In a long post, Faesal wrote that he was resigning to protest against the “marginalisation and invisibilization of Indian Muslims, attacks on special identity of J&K and growing culture of intolerance and hate in the mainland India”.

“I wish to remind the regime of the day that subversion of public institutions like the Reserve Bank of India, Central Bureau of Investigation and the National Investigation Agency has a potential to decimate the constitutional edifice of the country. I wish to reiterate that voices of reason in this country cannot be muzzled for long and the environment of siege will need to end if we wish to usher in a true democracy,” he wrote. Moreover, he decided to share his future plans on Friday. In the post, he also said that “I will be addressing a press conference on Friday to share my future plans. I will look forward to your support and blessings in this new mission,” he wrote.

Faesal belongs to Sogam area of northern Lolab valley in Kupwara district, completed his MBBS from Sher-i-Kashmir Institute of Medical Sciences (SKIMS) and cracked IAS in his first attempt in 2009. He was also the first Kashmiri to top the prestigious civil services examination.

For the past eight years, he was working as the Deputy Commissioner Bandipora, the Director of School Education and the Managing Director of the state power Development Corporation. 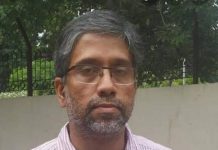 Indians stranded in Pakistan to start returning from Thursday