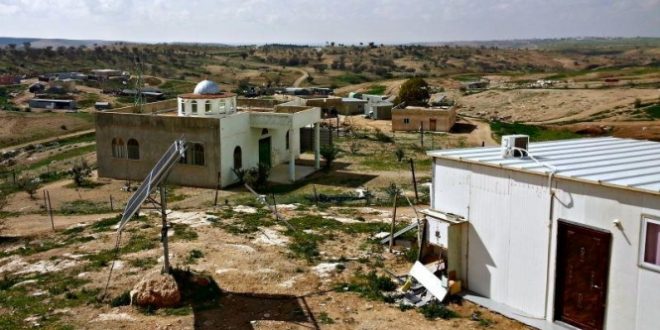 According to the reports of Israel Today, the Hebrew newspaper, Israel’s Minister of Agriculture and Development of the Negev, Uri Ariel, has completed a massive plan to expel 36,000 Bedouin Palestinians from unrecognized villages. After the approval, the implementation would start this year and will be completed within four years. The seized Bedouin areas are estimated at 260,000 dunums, on which the Israeli authorities will establish what they call as national projects, infrastructure and other “security” measures, which are required to ‘transfer’ the population to other villages, according to the reports.

On the ruins of the villages after their displacement, the Israeli authorities will expand the “Trans-Israel Highway” (Route 6), south of Israel, to the town of Nabatim in the Naqab, an area of 12,000 dunums. The plan indicates that the displacement of Bedouin Palestinians would begin this year, north of Route 31, and will last for four years. Final displacement in 2021 will begin with an annual budget increase, through intensified law enforcement authorities, in reference to the Israeli Police and the Ministry of Internal Security.

Besides that, the authorities of Israel will also transfer 5,000 Arabs to the areas of Abu Talul, Abu Qrinat and Wadi al-Naam, from the Israeli area of Ramat Bekaa, with the aim of transferring a factory for military industries from Israel to the Negev. The Israeli authorities also plan to displace them and confiscate them.

As per reports, the plan would be implemented only to those villages, who do not appear on Israeli official map. The Israeli authorities do not provide them with basic services such as food, water and electricity and the residents do not have addresses. Hence, the authorities do not recognize their rights on the land and have called them “violators” who take over “state lands.”

The Bedouin Development Authority was established in 1984 and controls the planning of displacement projects in the Naqab and administers the Israel Land Administration.