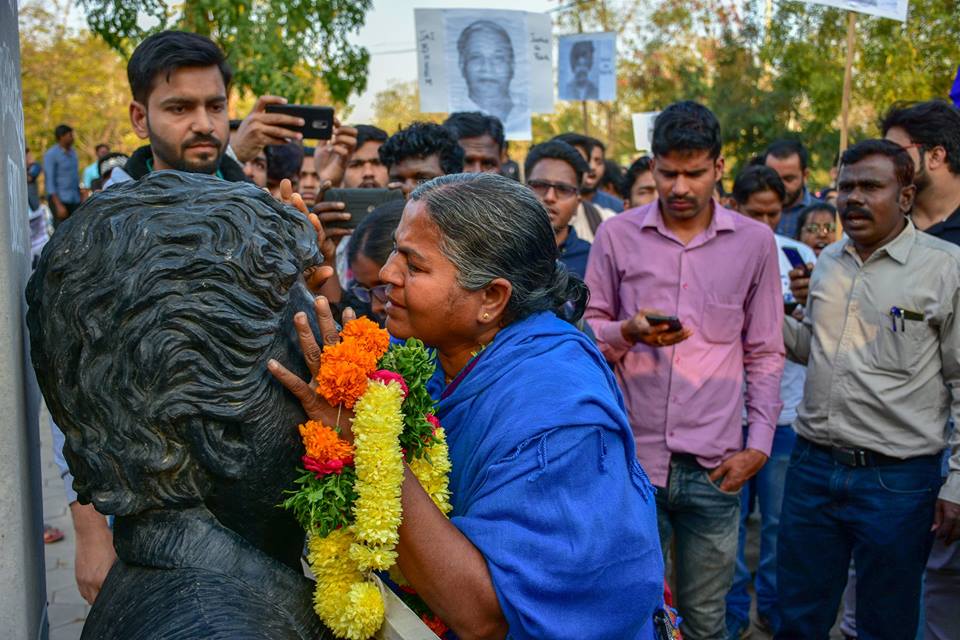 Addressing the students who had gathered at the University of Hyderabad, to commemorate Rohit Shahadath Din, Radhika Vemula on Thursday (17th January) called for the support of like-minded people to bring down BJP government in the upcoming elections.

Rohith Vemula was a PhD student of University of Hyderabad who committed suicide on January 17th 2016. The incident often described as an institutional murder, was an aftermath of the unjust action taken by the university administration against five students including him. Though the campus witnessed widespread protests demanding justice for Rohith, the then VC Podile Appa Rao had not resigned till date.

The Ambedkar Students Organisations along with other progressive students organisations have been commemorating January 17th as Rohith Shahadath Din. This year, the programme was held under tight security and was attended by Fathima Nafees, the mother of Najeeb Ahmad of JNU who went missing after a clash with ABVP students in October 2016. Other speakers at the event include P. Balaswamy, the father of Pranay, a victim of caste-based honour killing in Telangana, Professor Ratnam, Anoop Kumar and Advocate Bheem Rao.
Radhika Vemula also emphasised that the need of the hour is not just to bring down Appa Rao from the position of VC but also to strive for the downfall of the hindutva, anti-constitutional government.

Full speech given by Radhika Vemula at the University of Hyderabad is given below:

“ Jai Bhim to All

My sincere thanks to the students of ASA (Ambedkar Students Association) who are continuously taking the Rohith Movement forward and also progressive organisations like MSF, SIO, DSU and others. My revolutionary greetings.

My heartfelt salute to all the teachers and professors who stood as the backbone of this movement. My Jai Bhim to all those -many of the public organisations and political parties, Ambedkar students organisations and the progressive student organisations- across the nation who are taking the movement forward. Neel Salam and Lal Salaam to all the speakers who are sharing the dais with me.

I had heard indirectly from all of you about the sufferings that Rohith had to go through. I have involved myself in this movement over the last three years to get justice for him, for the sufferings that my son had to face. The only reason for his suffering is caste. The casteist Vice Chancellor Podile Appa Rao is responsible. All of you are aware of it. And the ruling government who is supporting the VC is also responsible for this atrocity.

Over these three years of my struggle, I have understood who the real enemy of Rohith is. I have understood that we are living in times where caste is being re-established in all the systems created by Manu through which we are governed and persecuted. The more I understand this, the more is my desire to participate and I also have been participating in movements against this with all the strength which I could gather.

I was highly distressed over the disappearance of Najeeb Ahmad. By knowing this, I have decided to fight with conscious determination against the Hindu communal and anti-constitutional forces. The very same force who is responsible for the death of Rohith. The disappearance of Najeeb. Despite widespread protests across the country, these communal forces did not change. But these brutal acts do not threaten me or deter me from moving forward. I want to fight back.

Not only Najeeb but in Una, the hinduthva forces in the name of cow had unleashed violent attacks on the Scheduled Caste people which sterned my fight against the Hinduthva communal forces. And that is the reason why I have supported the movement against the violence that happened and stood up to fight against it.

The same Hinduthva, anti-constitutional forces had brutally murdered journalist Gauri Lankesh. Jisha’s murder in Kerala, Delta Meghwal’s murder in Rajasthan, Asifa’s killing in Kashmir, Pranay in Telangana, the murder of Manthani Madhukar and many more atrocities were committed by them. I have participated in every movement and expressed my dissent throughout.

I’m not sure if the political leaders who won elections have been fulfilling their promises or are they fighting like me on each and every issue. But I work with the intention of fulfilling Rohith’s dream with deepest ambitions against the acts committed by the hinduthva forces. They are not scared of constitutional laws and are unleashing brutal attacks to re-establish the caste-based society and order.

VC Podile Appa Rao in a similar way is harassing the students who belong to SC, ST, BC and minority communities. In his three years of regime, he was seen harassing supporters and sympathisers of ASA and has been continually harassing the professors who stood in support of the movement and protested against him. If you take the records of the students against whom disciplinary actions have been taken, you can understand that all these students belong to SC/ST communities.

The Vice-Chancellor has imposed a fine of Rs.10,000 on two Dalit students for breaking a small lock. Continuous harassment has been meted out on Dalit students from their respective departments. They are making rules which force Dalit students to discontinue their PhD and disciplinary actions were taken against students- Prashanth, Munna and five others- for asking them to provide hostel accommodation for the Dalit students during vacation time. And disciplinary action has also been taken against SC, ST, BC, minority students. Show-cause notices, circulars have been issued to SC/ST students in order to suppress their voices. And there are many more such instances that have been happening over a period of time.

However, there is no disciplinary action taken against the upper caste students who have been flouting institutional rules, and nominal action was taken against ABVP students who have abused Prof. Laxmi Narayana on social media. From all these, it is very clear that the VC has been targetting the students who belong to SC/ST communities and this clearly shows his evil intentions to destroy ASA which stood in support for the cause of Dalits.

As a part of its democratic struggle when Rohith was alive, ASA was fighting the unjust judgement of social boycott that was meted out against five Dalit students and had brought up velivada in this very place. On the evening of 5th January, Podile Appa Rao destroyed velivada and caused a disturbance in the ongoing struggle.

This VC was well aware that this heinous act would lead to protests from students. In order to save himself, he had issued notices with false statements against Prashanth, Munna, Samson and Sreeja stating that these students have destroyed the university property and also filed false criminal charges against them. This declares his desire to destroy the lives of these students forever.

Appa Rao Podile is not qualified to continue as the Vice Chancellor. With his egotistic attitude, he has been harassing students who belong to SC\ST communities. And if we do not confront him, and his allies, these atrocities will continue. According to me, everything that was written by Rohith in his note is true and valid. There isn’t much difference between the violence unleashed by the Hindutva political forces across the nation and the atrocities committed by the vice chancellor here in the University of Hyderabad.

The ruling communal political party is always backing VC Appa Rao. He was set free without any bail procedures in the case of Rohith Vemula. The Andhra Pradesh government till today hasn’t confirmed the caste certificate of Rohith. And these excuses turned out to be the reasons for the police to not arrest the VC. And what kind of justice is this? How is it justified to connect the verification of my caste to arresting the VC who is responsible for the death of my son? On one hand, there is an intentional delay in the case. And on the other hand, the unity among public organisations is missing. And together, they are all trying to protect the accused.

We should relentlessly struggle for Justice for Rohith. The accused in the case are trying to approach the court for remand. Also, as a matter of fact, the investigation will not proceed until the caste certification is done by the government. These statements are in favour of the accused.

Rohith’s sacrifice has set a goal for all of us. The goal is to destroy caste order and caste-based society. In fact, Rohith’s sacrifice has led this world to know about the atrocities that are being committed by the hinduthva communal and anti-constitutional forces. These are supported by BJP. And we have to create a plan of action and strive for the downfall of BJP government. Public organisations and political parties should come together on a common platform. And I promise you that I will dedicate myself for this cause.

We have been fighting for the luminary ideology of Rohith Vemula, here on campus, outside the campus, in Delhi and across the nation. The same Vice Chancellor who is responsible for the setting up of velivada in the middle of this campus is now also responsible for its demolition. The act demonstrates that he is open to committing any kind of atrocity on Dalit students. He won’t change and he won’t stop and same is the case with BJP. It is time for us to fight for the removal of Podile Appa Rao as Vice-Chancellor of this university and we have to fight very strongly for this cause. We should stand together and decide on how to go about this. Otherwise, we would be showing injustice towards the sacrifice of Rohith, the disappearance of Najeeb, the murder of Pranay, Gauri Lankesh and Asifa.

The violence raised by Hinduthva forces at Bhima Koregaon, the atrocities committed in the name of gau rakshaks and anti-constitutional forces, who are trying to establish the laws of Manu here – we will answer to all these. If we leave it, this undemocratic caste ruling would continue. Only through confrontation, we get to establish Dr Ambedkar’s dreams of freedom, equality and fraternity. In the upcoming elections, these Manuvadis want to capture power and bring radical changes in the laws of the constitution by endangering equality and fraternity. Let the sacrifice of Rohith not go in vain. Together we can throw them out of the parliament. They are not even eligible to touch the constitution. They are not letting us have our constitutional rights. We can’t let this happen.

I realised in these three years that it is time to denounce all Hindutva communal parliamentary ruling. If not, there would be more mothers who would be crying over the loss of their children, like is the case with Najeeb, Pranay and Asifa. Besides this, the law has failed to punish the forces who meted out violence in Bhim Koregaon and there is no hope that the accused will be punished in the Una incident and also in the murder of Gauri Lankesh. No action is taken so far on these anti-constitutional forces who burned the constitution.

But for the Rohith movement the leaders of ASA Vijay, Sheshaiah, Munna, Prashanth, Samson, Sreeja, Lingaswamy, Rahul, Kanhaiya Kumar, Umar Khalid, Profesor Ratnam, Thathagath, and many more who stood as the backbone of the struggle are charged with criminal cases.

We should put an end to this discriminatory ruling and we should all come together for this. I will be with you in all kinds of circumstances but you should give this struggle a shape. I’m ready to take this movement forward. We should not bear this ruling anymore. Our movement doesn’t stop until the VC is removed from power.

With the inspiration of Rohith Vemula, let us find the right solution and change this society. I’ll be with you in this journey and I promise that I would put all my efforts to continue this movement until we achieve justice.